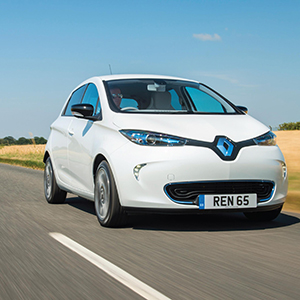 Renault are to support the POD Point ‘Charging around the UK’ (CATUK) event by setting an all-electric ZOE supermini on the 2,000-mile, 17-day journey.

The tour, which kicks off on June 12 in London, will take in 15 towns and cities, as well as several corners of the UK, including John O’Groats and Lands’ End, before finishing up in key green city, Brighton.

Along the way, it will be using a variety of charging sources and locations, ranging from gyms, residential, supermarkets, petrol stations.

“ZOE has the longest range of any affordable, mass market electric vehicle.

“It’s quiet, refined and nippy too, so it’s the perfect companion for such a long road trip.

“The average supermini covers 8,000miles in a year, so for ZOE to be tackling a quarter of this distance in just two weeks, will show just how viable it is as an alternative to fossil-fuelled transport.”

Conceived to prove that electric vehicles can slot simply into everyday lives, the tour’s aim is to educate the British public that top-up charging is broadly similar to powering other battery-operated items.

Along the way, POD Point will be breaking world records, cooking with a Michelin-starred chef, and racing down mountains while they charge.

Erik Fairbairn, Founder of POD Point, added: “With CATUK we’re showing that EV drivers need not fear range anxiety, as they can build up their own unique POD Point charging chain.

“By choosing the location of their charging points, they don’t need to alter their daily routine, which is great for their travel plans.

“My vision is to install a POD Point wherever you park your electric car, by building an extensive network of Pod Chains we’re eliminating range anxiety.”