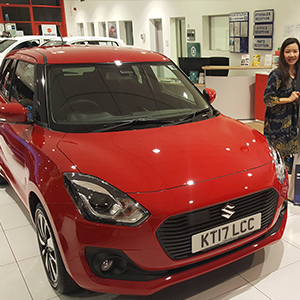 Raymond Critchlow from Northamptonshire became the first customer in the UK to drive away the all-new Suzuki Swift after it went on sale across the Suzuki dealer network on 01 June.

As soon as the clock struck one minute past midnight, he was handed the keys to his new ’17-plate Fervent Red-coloured Suzuki Swift SZ5 by Sales Executive, Tyler Grimbley, at the Progress Suzuki showroom on Garrard Way in Kettering. Raymond will be using the car for social commitments and his daily commute.

It also comes with a choice of frugal engines, namely the 1.0-litre Boosterjet unit which offers fuel consumption as high as 61.4mpg, and the 1.2-litre Dualjet motor which is available with Suzuki’s SHVS mild hybrid system that delivers CO2emissions as low as 97g/km.

Suzuki Swift owner, Raymond Critchlow said: “It’s always nice to be one of the first to do something, and it was a really novel way to collect my car. I was very proud to be driving the new model out of the showroom under the night sky before anyone else in the country, and I’m sure that it will prove to be a real head-turner!”

Wayne Bailey, Brand Manager of Progress Suzuki, added: “The all-new Swift has generated a real buzz since it was revealed earlier this year, and the order book is already filling up across the group. We were delighted to extend our opening hours so that we could give our first Swift customer the send-off that they deserved. We look forward to seeing Mr Critchlow again in the near future.”