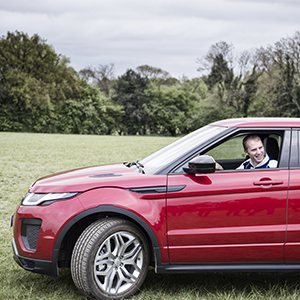 How do you help a top British Lions rugby player get to peak fitness for a tour of World Rugby Champions New Zealand?

England and Saracens star Owen Farrell pitted himself against a unique opponent; Land Rover’s best-selling luxury compact SUV, the Range Rover Evoque, in a battle between man and machine.

Farrell tackled the new high-performance Range Rover Evoque, powered by the new 2.0-litre turbocharged Ingenium petrol engine in an all-terrain bleep test – the ultimate test of endurance. The renowned SUV, with its new 290hp engine, accelerates from 0-60mph in only 6.0 seconds– making it the fastest sprinting Evoque to date.

Jaguar Land Rover’s new four-cylinder Ingenium petrol engine is now in production at the company’s £1 billion Engine Manufacturing Centre. Designed, engineered and manufactured in the UK, it is one of the most advanced engines the company has ever developed, delivering up to 25% more power than the engines it replaces and offer fuel consumption reductions of up to 15%.

Saracens and England player, Owen Farrell, Land Rover fan and the inaugural winner of the Anthony Foley Memorial Trophy for the European player of the year, said: “Every sportsman knows bleep tests are one of the toughest tests on the road to peak fitness because there is no hiding place. The bleep test was a great way to challenge myself because the Evoque was relentless.”

Farrell completed a bleep test between two fixed points on two different terrains in the unique challenge, gradually increasing the pace to keep time with the ever more frequent bleeps. The international rugby star, who will be part of the British & Irish Lions on tour in New Zealand this summer, is famous for his uncompromising approach and was up against an equally tough competitor.

The powerful Evoque lined up alongside Farrell, with international rugby union referee Wayne Barnes on hand to make sure both parties played by the rules.

Land Rover’s new British-built Ingenium petrol engine is available in two variants in the Range Rover Evoque; 240hp and 290hp. It features a twin-scroll turbocharger for improved performance on the road and low-resistance technologies for an ever more refined drive.