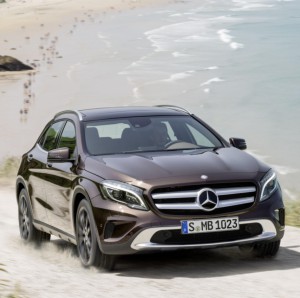 Mercedes-Benz have unveiled the all-new GLA-Class – their first-ever compact SUV.

The car, the fourth of five new Mercedes-Benz compact models, will be available with a choice of two petrol engines and two diesel engines.

Optional four-wheel-drive will also be available on the premium vehicle, which is officially launched at next month’s Frankfurt Motor Show.

Mercedes-Benz claim the GLA-Class is ‘progressive in design, versatile and impressive off-road’, and ‘mixes practicality with surefooted 4MATIC capability’.

They also believe the GLA-Class is ‘highly maneuverable around town, lively on country roads and dynamic and efficient on the motorway’.

More fleet-friendly are the diesels; the GLA 200 CDI is set to develop 136hp, a maximum torque of 300Nm and a displacement of 2.2litres.

All engines will feature the ECO start/stop as standard, and be combined with a six-speed manual transmission or the 76-DCT dual clutch automatic transmission.

Mercedes-Benz’ COMAND Online multimedia system has also been extended, offering improvements in facilities such as its display and Bluetooth.

The UK specification and prices will be announced in November, with orders taken at the end of the month.