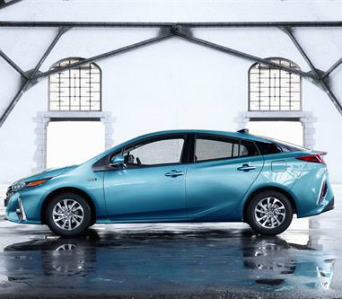 A brand new high-tech future model, which doesn’t go on sale until spring 2017, will be one of the highlight vehicles taking part in this year’s MPG Marathon, which gets underway next week.

The UK’s premier eco-driving challenge, which promotes efficient and environmentally friendly driving, will also see the first UK appearance of the second generation Toyota Prius Plug-in Hybrid, with the car arriving straight from the stand at the Paris Motor Show, where it made its European debut last month.

The latest derivative of the Prius,  one of the pioneers of hybrid driving technology, is set to go on sale here next year and aims  to double the EV driving range of the original Plug-in Hybrid to 30 miles, with a combined cycle MPG figure of 282.5mpg and CO2 emissions of 22g/km (subject to final homologation).

“We’re delighted that Toyota has taken the opportunity to demonstrate its future technology on the event, ahead of its UK on-sale date,” said event organiser, Jerry Ramsdale. “It goes to show how much the MPG Marathon has become recognised by the industry as a shop window into the world of efficient low and zero emissions vehicles. It’s astonishing to think how far cars have come since the event began, and this is a perfect example of how they’ve grown to be cleaner and greener.”

“As pioneers and global leaders in hybrid technology as well as the first manufacturer in the world to introduce Plug-in hybrid, the second generation Prius Plug-in raises the bar in terms of vehicle efficiency,” said Neil Broad, Toyota’s General Manager of Fleet and Remarketing.

The Prius is diametrically opposed to the Ford Mustang V8, which will be proving a very different message about fuel efficient driving – demonstrating that, with the correct driving style, even a performance car can be parsimonious.  The Prius Plug-in, meanwhile, represents the technology of today, while the University of Birmingham’s hydrogen fuel-cell powered Hyundai iX35, announced as an entrant in this year’s MPG Marathon last month, is a window into the future of fuel efficient driving. The eclectic mix shows the incredible diversity of vehicles on the event, with prizes available in several categories to reward not only the most fuel efficient cars, but also the most effective drivers.

Sponsored by ALD Automotive, RAC Business and Crystal Ball, a provider of fleet management and telematics systems, the MPG Marathon takes place on October 18-19 and is based at the Heythrop Park Resort in Oxfordshire. Competitors will be tasked with planning their own routes to four different venues across the heart of the country, including a visit to the iconic Silverstone racing circuit in Northamptonshire, home to the British Grand Prix.

Their aim will be to achieve the highest possible MPG figure for their vehicle of choice, with prizes being awarded for those that achieve not just the best overall MPG figure, but also the most significant improvement over the manufacturer’s quoted figure.

Although the 2016 event is already heavily subscribed, there are a limited number of places still available for vehicle manufacturers, fleet operators, dealer groups or even individuals to take part.

To find out more about the event, or to enter, go to www.thempgmarathon.co.uk