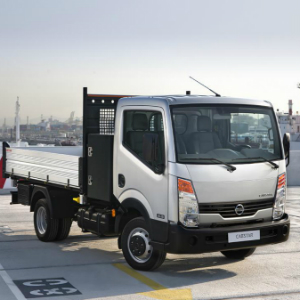 Nissan’s long-established cab-over favourite, the Cabstar, has been named as Glass’s Used Van Hero for November.

Each month, Glass’s commercial vehicle editors hold a meeting to name the current Used Van Hero in the UK market – the model they believe offers outstanding value, quality and ability.

“However, it is this layout that makes it very popular, both as a standard drop side model and as the basis for a wide range of conversions.”

“Because of its uniqueness, values tend to hold well but, generally speaking, this is a well-built vehicle and even an older example should give trouble-free service.

“There are only really a couple of problem areas – one is potential rust under the driver’s seat and the other is that, compared to most modern vans, equipment is sparse.”

WHY? A very adaptable forward control vehicle and a favourite of the building trade.

WHEN WAS IT ON SALE? The first generation of the Cabstar was launched in 1968 as a replacement for the Datsun Cablight. It’s been around ever since.

WHAT’S BAD? Designed as a load lugger, the cab-over design of the Cabstar means it’s unlikely to be the quietest vehicle on the road and its basic specification is not on a par with most vans on the market. It can also be prone to rust, particularly under the driver’s seat.