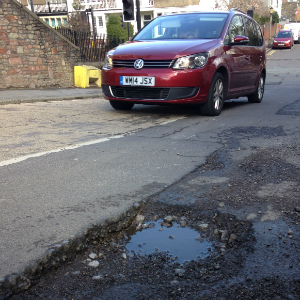 Damage to vehicles due to potholes and sitting in congested traffic are the top business bugbears for companies that run fleets, according to new research by RAC Business*.

In total, 46% of bosses listed pothole damage as their main concern, with businesses based in the North East (62%) and South East (55%) most likely to report it as an issue. And, 43% said congestion on their local road network created a challenge to their business.

The research was carried out among 500 UK firms which run fleets to highlight the issues currently facing businesses. In addition, one in five (20%) said they are concerned about the prospect of a wider economic slowdown impacting their operation. A similar percentage, (19%), cited poor reliability of company vehicles as a concern, along with restrictions caused by congestion charges and low emission zones (17%).

But the state of the roads and the associated costs in terms of dealing with the damage caused to vehicles is by far considered the biggest challenge to businesses in 2016.
Britain’s potholed roads have led the RAC to see a steady increase over the past 10 to 15 years in the number of call-outs to business customers’ vehicles suffering damage due to neglected road surfaces.
Components such as damaged suspension springs are often associated with potholes, and the RAC has seen a 16% increase in such incidents from 1,249 in 2014 to 1,455 in 2015 among fleet vehicle customers.

Jenny Powley, sales director for Corporate Business at RAC Business, said: “Potholes can be a real headache, not just for drivers, but for the business owners that have to foot the bill for the repairs. The time spent off the road due to the damage caused by potholes can amount to hundreds of pounds a day in lost productivity.

“It’s concerning to see the number of pothole-related breakdowns rising at a time when the Government has committed to investing in maintenance and improving road infrastructure.

“Despite the fact that local authorities increased their spending in 2015 to try to catch up with some of the road maintenance and repair backlog, this data suggests that there is still some way to go.

“The last couple of winters haven’t seen particularly freezing temperatures, which can be a major cause of potholes. But the reality is due to the limited resources available it seems it’s not been possible to take advantage of that respite and keep up with the demand.”