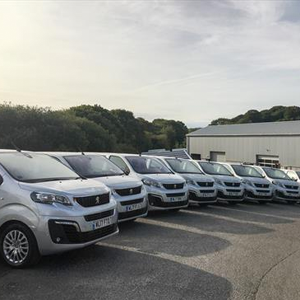 25 New PEUGEOT Travellers will replace a mixed fleet of vehicles operated by Spectrum, which provides residential care for adults and children, as well as education and outreach support for those living with varying degrees of autism in Devon and Cornwall.

The vehicles will be used to provide transport for those who are cared for by Spectrum. The organisation, which is a registered charity, operates 22 adult residential homes in the region, as well as the Three Bridges Education Centre near Truro and the Pearl Information and Advice Centre in Truro. Spectrum currently cares for around 90 individuals in its homes as well as 10 pupils at the Three Bridges School and around 12 who receive outreach services. Those who are assisted by Spectrum range in age from 14 to 66.

The PEUGEOT Travellers will be supplied by the PSA Group’s new leasing company Free2Move Lease and will be delivered and maintained by the local PEUGEOT Dealer, the Hawkins Motor Group. The new deal builds on the relationship established by Hawkins through the supply of a fleet of Citroën Berlingo Multispace models in 2016.

“The versatility of the new PEUGEOT Traveller has helped PEUGEOT to secure this valuable order”, commented PSA Group Fleet Director Martin Gurney, “The service provided by the Hawkins Motor Group with the earlier order for the Citroën Berlingo Multispace has been an important element in securing the deal. We hope that this will be a building block in an enduring relationship with Spectrum.”

The Traveller is available in three lengths with seating for a driver and up to eight passengers. A variety of seating layouts means that the Traveller can be adapted for a range of passenger needs.

Spectrum can trace its roots back to the early 1970s when a group of parents of children diagnosed with autism established the Devon and Cornwall Autistic Society as a charity to cater for the educational needs of children with autism in the area. As those children grew, the organisation has evolved to cater for their needs as they became adults and now provides a wide range of support services for those living with autism.