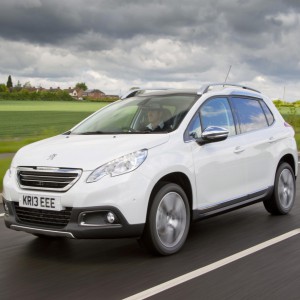 Peugeot’s popular 2008 compact crossover is now on sale in the UK.

More than 1,300 orders have already been taken prior to the vehicle’s showroom arrival, with prices starting from £12,995.

With four trim levels to choose from and Grip Control available as standard on certain versions, Peugeot are expecting high demand.

The French manufacturer have beaten all sales objectives in other European countries, where more than 32,000 2008s have been sold in just two months.

UK demand so far is two-thirds diesel, with the e-HDi 92 Allure accounting for 20% of orders and the e-HDi 115 Feline the second most popular.

All 1.6 litre petrol and diesel models in Allure and Feline specification come with Peugeot’s unique Grip Control as standard.

Neil Moscrop, Director of Sales for Peugeot UK, said: “We’ve been thrilled with the number of customers who have made a concrete commitment to the 2008.

“That the two higher-grade trim levels are getting so much attention shows what a fantastic product we’ve got, both in terms of specification and value for money.”

The 2008 marks Peugeot’s debut in the compact crossover arena.

Launched at the 2013 Geneva Motor Show, it combines the design of the 3008 with the features, performance and low-emission engines of the new 208 supermini.

Peugeot’s ongoing new product offensive has generated excellent sales results in the first half of 2013, with a 7% rise over 2012.