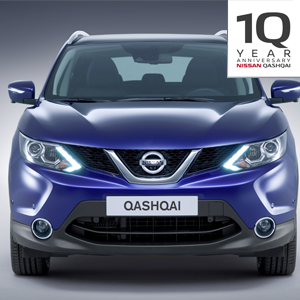 Nissan has focused on the number 10 during January and February, as the Qashqai celebrates a decade of sales success and crossover leadership. To mark the anniversary, the brand has released an all-new video showcasing some of the other numbers which have made the Qashqai Europe’s best-selling crossover.

There’s no doubt that 2.3 million – the number of Qashqai sold in Europe since it was launched in February 2007 – is one of the most impressive figures.

Also worth noting is the number 21. That’s how many rival models have been launched since the Nissan Qashqai pioneered the crossover segment as the industry knows it today. But you can see below why this number is relevant for a very different reason.

Here are just some of the numbers which have made the Qashqai such a success story for Nissan:

3.3 million – Qashqai sold globally since February 2007, when the car first went on sale

2.3 million – Qashqai sold in Europe over the same period

75,000 – the number of ‘continuous quality assurance’ tests Nissan engineers have carried out on the Qashqai since 2007

45,000 – an estimate of how many jobs in Europe are supported by the Qashqai, across Nissan’s facilities and with suppliers

2,708 – parts in a second-generation Nissan Qashqai

2,015 – the year in which the Nissan plant in St Petersburg, Russia started to build the Qashqai, to keep up with customer demand

600 – number of days which the Nissan Qashqai’s audio system was played at full volume, to ensure it sounds crystal-clear all through the car’s life

226 – companies which supply parts for the second-generation Nissan Qashqai

99 – countries where the Nissan Qashqai is currently on sale

62 – seconds that it takes for another new Qashqai to roll off the production line at Nissan’s state-of-the-art plant in Sunderland, UK

21 – months it took the second-generation Qashqai to sell 500,000 units. No other British-built car has reached that total so quickly

10 – years since the original Qashqai was launched

1.5 – the size of the diesel engine, in litres, of the most popular version of the Qashqai. Mated to a two-wheel drive / six-speed manual transmission, and finished in Pearlescent Black in N-Connecta grade, it’s the top-selling model.

1 – when it comes to crossovers, Qashqai was the first. Nissan invented the segment and remains Europe’s best-selling crossover.