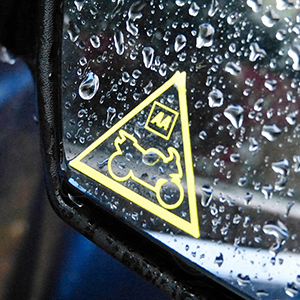 Tony Rich, an AA patrol from Warrington, kicked off the ‘Think Bikes’ campaign alongside Olympic cyclist Chris Boardman and 20-time Isle of Man TT winner John McGuinness on Friday, designing small wing mirror stickers to remind drivers to do a ‘double-take’ for those on two wheels.

The campaign, supported by the AA and Secretary of State for Transport, is the brainchild of Mr Rich, who tragically lost a family friend, Jack Bellis, 19, in a motorbike accident in October 2012.

There is a bicycle sticker for the passenger side and a motorcycle one for the driver side, with an initial one million being distributed by the AA and at Halfords outlets.

Mr Rich said: “We are all a bit overwhelmed to see how far the campaign has come.

“It’s been really inspiring to see this germ of an idea launched nationally with the help of Chris Boardman and John McGuinness.

“‘Think Bikes’ is just about making a difference.

“We would encourage all drivers to use the free stickers and do a ‘double-take’ in their mirrors for cyclists and motorcyclists.”

“We are all a bit overwhelmed to see how far the campaign has come…’Think Bikes’ is just about making a difference.”

New research by the AA shows 93% of drivers admit it is sometimes hard to see cyclists while driving, with 55% often ‘surprised when a cyclist appears from nowhere’.

The study also revealed that failure to look properly is the most commonly cited (42%) contributory factor in UK road accidents.

‘Think Bikes’ is supported by British Cycling and The Motorcycle Industry Association, as well as Transport Secretary Patrick McLoughlin.

The Institute of Advanced Motorists (IAM) also backed the campaign.

Neil Greig, Director of Policy and Research at the IAM, said: “The IAM welcomes any campaign which raises awareness of how vulnerable cyclists can be around motor vehicles.

“Reminders can be useful but the best drivers should already be looking out for cyclists at all times.”