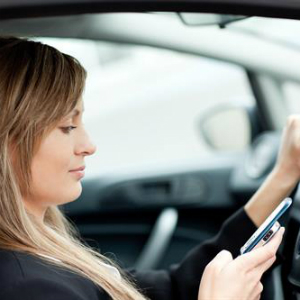 A hard-core of motorists still admit to flouting the law by habitually using their handheld phones while driving despite penalties for the offence being doubled on 1 March, new RAC research has found.

In September 2016 the RAC revealed that the illegal use of handheld mobile phones at the wheel to ‘snap, chat, text and tweet’ had reached epidemic proportions. Days later the Government announced the penalty for the offence would increase to six points and a £200 fine in a bid to stamp out the dangerous habit.

Twelve months on, however, research carried out with 1,727 motorists for the RAC’s Report on Motoring 2017 shows the move has not stopped a persistent 9.2m drivers breaking the law on a regular basis.

While the number of motorists who say they make or receive calls illegally at the wheel has fallen by a quarter (31% in 2016 v 23% in 2017), of those questioned about the impact of the tougher penalties 15% –  or 5.3m drivers – said this had not made them stop. This is split between 8% (2.8m) who said they had not changed their habit at all and 7% (2.5m) said it had not really made a difference.

Of the 89% of drivers who said they were aware of the tougher penalties for mobile phone use, the Report identified six in 10 (58%) – or the equivalent of 20.6m drivers – who said they had never used their handheld mobile phone when driving.

Sixteen per cent – or 5.7m drivers – said they had completely stopped using their handheld phone altogether when driving since the law change.

A further 11%  – 3.9m drivers – said they had curbed their illegal behaviour ‘a little’ but these occasional ‘illegal handheld phone use’ drivers have not broken their habit for good. It should be pointed out that this does not include the 11% – 4.4m of all UK drivers – who stated they were not aware of the law change so the figures for illegal phone use could in fact be higher.

“Twelve months ago our research revealed that the illegal use of handheld mobile phones by drivers was at epidemic proportions – a year on and the situation still remains dire. Despite the law change and some high profile police enforcement campaigns we are in a situation where overall roads policing officer numbers are down on 2016 by a massive 30% since 2007*. It is clear we have a hard core of persistent offenders who believe they can get away with it by continuing to flout the law every day and we fear this may get worse with fewer dedicated roads policing officers.”

Every figure for every form of illegal handheld phone use is worse when vehicles are stationary compared to on-the-move, indicating that many motorists think that it is safe to interact with a handheld phone when stopped in traffic.*

In addition, 16% (the equivalent of 6.4m drivers) say they have taken photos or video when stationary in traffic which is down a quarter (27.3%) on a year ago when 22% admitted to this highly irresponsible activity.

Pete Williams continued: “More has to be done to educate drivers that any use of a handheld phone at the wheel is both illegal and presents both a mental and a physical distraction that could ultimately cause a crash and the loss of life.

The Government, and indeed all those who campaign on road safety, need to impress on drivers the dangers of being distracted at the wheel and the consequences of using a handheld mobile phone while driving.

“Drivers need to take more responsibility when they get behind the steering wheel and think seriously about whether choosing to pick up a handheld mobile phone is really worth the risk.”

The illegal use of handheld phones by drivers was named as the number-one concern for motorists surveyed for this year’s RAC Report on Motoring, with 16% citing it as their top worry from a list of 23 common concerns. This was up from 13% in 2016 and from 9% in 2015.

In comparison to the 16% citing mobile phone use as their top concern 10% ranked the condition of local roads, 9% ranked the cost of fuel and 8% the cost of insuring a car as their number-one concern. Overall, 40% of drivers listed illegal handheld mobile phone use – and the distraction it inevitably causes – as one of their top four concerns, very similar to last year’s 41%.

Pete Williams said: “We had hoped concern about drivers talking or texting at the wheel on their handheld phone would decline as a result of the Government taking the decision to increase penalties with fewer drivers breaking the law but this has not been the case.

What may well have happened is that awareness of the offence has risen among law-abiding drivers who have become increasingly incensed by the number of drivers they still see flouting the rules.

For drivers who don’t do it there is nothing more frustrating than seeing others blatantly using a handheld phone at the wheel on a daily basis and putting other road users at serious risk of injury or even death.

“The numbers of drivers still using their handheld phones at the wheel remains at epidemic levels and is a serious problem for society. The Government, police and road safety organisations still have a huge job to do to end the handheld mobile phone menace.”

Handheld mobile phone use by age and gender

Reasons for illegal handheld phone use at the wheel

There are signs that the Government’s tougher stance on handheld phone use has had some impact. This year’s Report found high levels of awareness about the tougher law with nine in 10 drivers (89%) aware of the new penalties which came into force on 1 March this year. Just one in 10 (11%) said they didn’t know that the fine and points that you receive if caught using your handheld phone when driving had increased. However, just a quarter (27%) knew the detail that the fine has doubled to £200 and the points have gone up to six.

Similarly only one in four drivers (28%) were aware that the Government has recommended that those caught should not be offered a ‘driver offender retraining’ course but should automatically receive the full penalty.

A factor that may be influencing persistent driving illegal behaviours is the reduction in the number of dedicated roads policing officers. In England and Wales the number has declined by 30% in 10 years from 3,766 in 2007 to just 2,643 in 2017*.

The Report has revealed that a concerning proportion of motorists do not expect to be caught if they break motoring laws – although the 24% who agree with this sentiment is a drop on the 27% recorded last year. Meanwhile a majority of drivers (62%) still feel there are not enough roads policing officers to enforce traffic laws effectively.

The RAC launched its ‘Be Phone Smart’ campaign in March 2017 in an attempt to encourage drivers to kick their handheld mobile phone habit. The campaign encourages motorists to make a personal commitment not to use their handheld phone when at the wheel and has the backing of a wide range of organisations including the National Police Chiefs’ Council, the Government’s THINK! campaign, IAM RoadSmart, the Road Haulage Association, Road Safety GB and Transport Scotland.

Pete Williams said: “While we can only hope that the hard core of offenders who persist in using their handheld phones regardless of the significant risks involved will feel the full weight of the law – the reality is that this may not be the case because of the declining number of roads police. However, there is an opportunity to appeal to those motorists who have curbed their behaviour a little, but admit to occasionally slipping back into the habit, to stop using their handheld phone at the wheel once and for all.

“The BePhoneSmart.uk campaign encourages drivers to do exactly this by making a promise to stop using their handheld phone at the wheel and to share their pledge with friends and family via social media. It also offers advice and tips on how to break the habit and quit for good.”