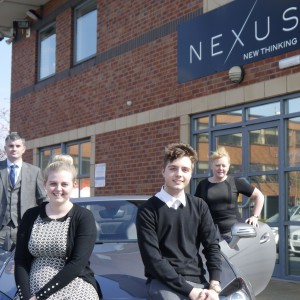 Nexus Vehicle Rental, the UK’s leading corporate vehicle rental provider, has been recognised for its commitment to career development for the second time in three years, in one of the professional service industry’s most prestigious award programmes.

Following its success in 2015, Nexus has again won the title of SME Employer of the Year in the BPP Professional Education Apprentice of the Year Awards.

The judges were particularly impressed by Nexus’ in-house personal and career development programme, NexSteps, stating that the submission scored higher than any other entry across all award criteria.

The programme includes temporary work placements at local colleges and universities, 12 month apprenticeships supported by fully funded study qualifications and the continued professional development of its existing workforce. NexSteps encourages apprentices to stay with the business following the completion of their course, with 13 out of the 30 apprentices taken on since the scheme was launched now in full-time roles with the firm. Apprentices can progress laterally and vertically through the business based on their skillsets and preferences.

Jack Glyn started his apprenticeship with Nexus in 2014 and has gone on to complete level three in business administration. He is currently part of the project and implementation team.

Jack said: “The Nexus Vehicle Rental apprenticeship scheme has helped me develop both professionally and personally. I started out taking calls and have gradually worked my way up, taking on important projects and being a key contact on new VIP accounts as well as visiting customers and representing the business.

“The scheme offers plenty of room for progression – the tools you have to aid your development within this business have allowed me to thrive and make a start in what will now be my career.”

Based near Leeds, Nexus provides access to over 500,000 vehicles, including 100,000 specialist and commercial vehicles, across 2,000 UK locations, via an unrivalled network of suppliers. Through its award-winning online rental booking and management tool, IRIS, vehicles can be booked in just 10 seconds at the click of a mouse.

David Brennan, CEO at Nexus Vehicle Rental, said: “We are delighted that the hard work of the Nexus team has again been recognised in such a prestigious awards programme. To win this award for the second time in three years is testament to the career development programme at Nexus, which we are immensely proud of.

“We have six active apprentices within the business at the moment, working hard towards recognised qualifications. Training up, bringing on and keeping bright talent is something we are committed to, in addition to continually supporting and developing our existing workforce.”