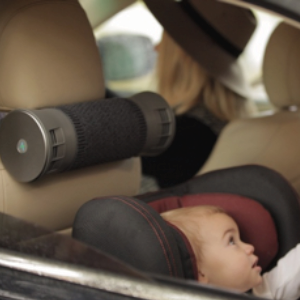 The first technology to effectively protect people from Nitrogen Dioxide in cars (NO2) is launched today, and is set to transform the lives of children and other groups vulnerable to air pollution.

Airlabs has developed a product, the Airbubbl, which can radically improve the air quality inside cars, and is in talks with car manufacturers about building the technology into their vehicles to combat the high levels of NO2, primarily from diesel emissions, found inside vehicles.

The Airbubbl product has been found to remove over 95% of the Nitrogen Dioxide (NO2) that passes through it using Airlabs’ proprietary re-engineered nano carbon technology in product trials in collaboration with the University of Copenhagen.

In a recent trial in central London on some of the UK’s most polluted streets, the Airbubbl was found to reduce NO2 concentrations inside the vehicle by up to 70% with the ventilation turned on and up to 81% with the ventilation turned off entirely. In a timeframe of 10 minutes the Airbubbl reduced NO2 concentrations by over 95%.

“What many drivers probably don’t realise is these fumes can be just as high in the car as outside, and in some cases even higher,” he wrote earlier this year. “Children sitting in the back seat are likely to be exposed to dangerous levels. You may be driving a cleaner vehicle but still be collecting toxic gases from all the vehicles around you.”

Air pollution from NO2 and particulates is estimated to cause 40,000 deaths each year in the UK. Although built-in car air filters help trap particulates they do not remove gases, and studies have found that NO2 levels primarily from diesel emissions, inside vehicles can be worse than those on the road outside.

Duncan Mounsor, Managing Director of Enviro Technology Services, which conducted the trial, said: “As a scientist, I’m sceptical about the claims of air-cleaning devices but the Airbubbl really works, and I’m not aware of anything like it on the market. Air pollution is as serious a public health issue as passive smoking and obesity, and if I had to spend many hours a day driving in the city, I would want an Airbubbl with me.”

The Airbubbl fastens behind the driver’s headrest and plugs into the car’s cigarette lighter. It sucks in polluted air, traps NO2 on a re-engineered nano carbon filter, removes particulates, and directs clean air at head height to the driver and passengers using optimised airflow.

Airlabs specialises in developing technology that improves air quality, and is staffed by airflow engineers and atmospheric chemists. CEO Sophie Power said: “Air pollution affects the health of millions of people worldwide and is a big worry for many parents. We have developed the Airbubbl because there is currently no way to effectively remove NO2 inside your car and protect your children.”

“We are now talking to car manufacturers about building our technology into their vehicles. This should be the standard to protect the health of drivers in polluted towns and cities.”

The Airbubbl fastens behind the headrest

This diagram shows the airflow around an Airbubbl mounted behind a front seat headrest. The colours indicate pollution levels, with the highest in red and the lowest in dark blue. It shows polluted air from car’s ventilation system being directed into the footwell and beneath the seat while clean air circulates at head height in front and back seats.

A major report by the Royal College of Physicians warned that children, older people and adults with long-term conditions are particularly vulnerable to outdoor air pollution.

It stated: “Gestation, infancy and early childhood are vulnerable times because the young body is growing and developing rapidly. We know that the heart, brain, hormone systems and immunity can all be harmed by air pollution. Research is beginning to point towards effects on growth, intelligence, and development of the brain and coordination.”

A major study by Kings College study found that high levels of air pollution are stunting the growth of children’s lungs. “The data shows that traffic pollution stops children’s lungs growing properly. The evidence suggests that by 8-9 years old, children from the most polluted areas have 5 to 10 per cent less lung capacity and they may never get that back.” Ian Mudway, a respiratory toxicologist at King’s College London

Outdoor air pollution has been described by MPs as “a public health emergency” and it affects towns and cities throughout the UK. The Supreme Court has ordered the Government to end illegal air pollution as soon as possible, with 37 of 43 regions in the country breaching EU safety limits for NO2.

The Airbubbl builds on successful trials of street furniture that cleans air in pollution hotspots. Airlabs developed a clean air bench for Transport for London, which cleans 800 cubic metres of air an hour on Bird Street, just of Oxford Street. It also trialled three anti-pollution bus shelters earlier this year with The Body Shop and JCDecaux.

The Airbubbl was independently trialled in central London by Enviro Technology Services using the “smogmobile”, a mobile air quality laboratory carried in an electric vehicle which measures air pollution and creates no emissions.

•  The trials found that with the ventilation on the Airbubbl reduced NO2 levels inside the vehicle by up to 70% and the levels of fine particulates (PM5) by up to 86%.

•  With the ventilation turned off the Airbubbl reduced NO2 levels inside the vehicle by up 81% and PM5 by up to 77%.

•  In a timeframe of 10 minutes with the ventilation turned off the Airbubbl reduced NO2 concentrations by over 95%.