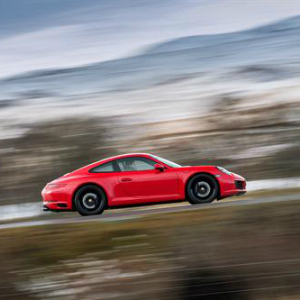 The New Year might be just six days young, but the Porsche 911 has already been hailed by The Sunday Times Driving editorial team as its top car of 2016.

Based on verdicts from the newspaper’s top 100 cars driven in the past year, the latest generation of the iconic coupe from Stuttgart inspired the judges to comment: “In the updated 911 Carrera S, Porsche has taken a great car and made it better. Quicker than the version it replaces, the new 911 is also more powerful more of the time…it’s comfortable on long journeys, sure-footed on B-roads and in the wet and more fun than a summer’s worth of rollercoaster rides…”

In addition to scooping the top award, the 911 also placed first in the Sports Car category. Furthermore, the Boxster Spyder, Cayman coupe, and the Macan compact SUV each received commendations in their respective categories.

The Driving supplement is a popular part of the authoritative Sunday Times newspaper, and also is accessible via the driving.co.uk website.

For over 50 years, the Porsche 911 has been acclaimed as one of the world’s benchmark sports cars. With such illustrious history, the introduction of a new model is always highly anticipated and the latest generation unveiled last September at the Frankfurt Motor Show is no exception.

The new 911 Carrera
The core appeal of the rear-mounted, flat-six engine in the 911 and its characteristic sporting driving experience resonate with owners and enthusiasts alike. This reputation for responsive and dynamic performance, forged both on the road and race track, coupled with unparalleled everyday usability, underpins the unstinting appeal of the 911.

A key factor in the success of the 911 since its debut in 1963 is that Porsche engineers work hard to ensure it remains relevant in changing times. In this spirit, highlights of the latest model include innovative twin-turbocharged, 3.0-litre flat-six engines, an advanced chassis with an even greater spread between performance and comfort, and a new infotainment system. With the benefit of more than four decades of experience with turbocharging – in both motor racing and production sports cars – the new engines in the new 911 Carrera set benchmarks in terms of performance, driving pleasure and efficiency, and position the sports car to extend its iconic status ever ahead into the future.

The completely new engine generation with twin turbocharging now featured in the 911 Carrera has raised power, efficiency and also intensified the emotional driving experience. As is typical of the 911, at the rear of the Carrera lies a 3.0-litre flat-six engine, developing 370 hp (272 kW). The Carrera S now delivers 420 hp (309 kW). In both cases this represents a power boost of 20 hp (15 kW) over the prior model. The 911 Carrera S produces more horsepower courtesy of turbochargers with modified turbine compressors, a specific exhaust system and tuned engine management.

The new Porsche engines are characterised by significantly increased torque (60 Nm in each case), and with maximum torque of 450 Nm and 500 Nm respectively delivered constantly from 1,700 rpm up to 5,000 rpm in both cases, thus ensuring responsive performance. At the same time, with a maximum engine speed of 7,500 rpm the new generation clearly exceeds the top revs of conventional turbo engines – and, of course, both are underscored by the typical sonorous Porsche flat-six engine sound.

Every new 911 generation boasts enhanced performance and efficiency compared with their predecessors. The 911 Carrera Coupé with Porsche-Doppelkupplung (PDK) and Sport Chrono Package sprints from zero to 62 mph in 4.2 seconds – making it two tenths of a second faster than its predecessor. The 911 Carrera S with PDK and Sport Chrono Package achieves this benchmark in just 3.9 seconds (also 0.2 secs swifter). This means that it is the first 911 in the Carrera family to undercut the magic four second mark. And the top speeds of both models have also increased further: the 911 Carrera now has a top speed of 183 mph (an increase of 4 mph), while the 911 Carrera S now reaches 191 mph (an increase of 3 mph).

The Porsche 911 has always balanced performance and efficiency, sportiness and everyday usability. The new engines further extend the span of these apparent contradictions. Depending on the model, the 911 is now almost 12 per cent more efficient. The 911 Carrera with PDK transmission returns 38.2 mpg Combined (an increase of 3.8 mpg), while the 911 Carrera S with PDK consumes 36.7 mpg Combined (an increase of 4.2 mpg).

The new option of rear-axle steering, available on the Carrera S models for the first time, extends further the range of dynamic virtuosity. The benchmark fastest lap time around the North Loop of the Nürburgring is ten seconds faster than before.

Many exterior features of the 911 Carrera have been visually refined: these include new headlights with four-point daytime running lights, handles inset to the door panel without recess covers, a redesigned engine lid with vertical louvres and new tail lights – including the now characteristic four-point brake light Porsche motif. Inside, a new Porsche Communication Management with an enhanced multi-touch display console offers a considerably expanded range of functions and greatly simplified operation.

The new generation 911 range is now on sale in the UK and Ireland priced from £76,412 (€129,713 in Ireland). The line-up comprises Carrera, Carrera S, all-wheel drive Carrera 4/4S models, the open-roofed Targa and the emphatic Turbo and Turbo S derivatives.

Each new car customer is also able to explore the potential of their new car by participating in a complimentary course at the Porsche Experience Centre, Silverstone.

At Porsche, innovations and developments that have proved themselves under extreme racing conditions always benefit production models, too. Testing in motorsport in particular ensures the performance and resilience of new engines for production sports cars. In the development of turbocharged six-cylinder ‘boxer’ engines Porsche can therefore look back on more than 40 years’ experience.