The New Audi A7 Sportback 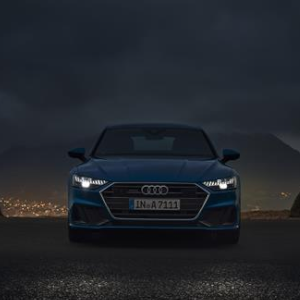 The familiarly rakish silhouette of the A7 Sportback is ready to reappear in the UK Audi model portfolio, and it is virtually the only feature of the second generation five-door coupé that is carried over.

Priced from £54,940 OTR, and due with its first UK customers in April, the all-new A7 Sportback has been carefully but comprehensively updated visually with reference to the latest Audi design language, and brings on board the most contemporary and transformational technology to upgrade every facet of the driving experience.

With its large surfaces, sharp edges and taut, athletic lines, the latest A7 Sportback draws inspiration from the Audi prologue concept study that spearheaded the introduction of the new Audi design language.

In common with the A8 which was the first to take the new direction into series production, one of its key defining features is a flat light strip which creates a continuous light pattern across the rear – a distinction that will mark out all models in the upper echelons of the Audi range in future. When the doors are unlocked and again when they are locked, fast-moving light animations play in the rear lights and in the headlights, highlighting the Sportback’s imposing dynamics while standing still.

The cabin projects the new A7 Sportback even further into the future. It has been conceived according to a reduced, clean design language, with an emphasis on horizontal lines and a sleek instrument panel adding to the feeling of airy spaciousness.

Compared with the previous model, interior length has increased by 21 millimetres, resulting in more rear knee room. Rear passengers also enjoy more head room. A three-seat rear bench is standard for UK models, and when its backrest is fully stowed the luggage compartment capacity expands from 535 litres to a generous 1,390 litres.

In common with the A8 the communications hub of the new A7 Sportback is a new MMI touch response operating concept based around 10.1-inch upper and 8.6-inch lower touchscreen displays which appear to blend into the dashboard when switched off. The two large, high resolution touch displays replace the rotary controller and satellite button system used by the previous model. They provide haptic and acoustic feedback as confirmation when a fingertip triggers a function.

With its comprehensive connectivity, the Audi A7 is perfectly equipped for long-distance touring. It offers customers the same broad range of convenience, safety and customisation technologies as the new Audi A8. Up to seven drivers can store their preferred settings in individual user profiles, and as many as 400 parameters can be personalised. The online services from Audi connect have been expanded to include features such as the traffic sign and hazard information Car-to-X services, which utilise the swarm intelligence of the Audi fleet.

Intelligent and convenient: the driver assistance systems
By activating the parking pilot and garage pilot, which will be introduced in stages from 2018, the driver can manoeuvre the A7 Sportback autonomously into and out of a parking space or garage without having to sit in the car. This is performed by launching the function via the myAudi app on their smartphone.

These functions are just two of a total of 39 driver assistance systems the A7 Sportback will offer to make daily use easier for the driver. They are split into three packages: Parking (gradual introduction beginning in 2018), City Assist (with the new Cross Traffic Assist Front feature) and Tour.

The latter includes features such as the efficiency assistant, which facilitates a driving style conducive to reducing consumption, and the adaptive driving assistant (ADA), which supplements the adaptive cruise assist with helpful steering interventions designed to keep the car in its marked lane. All driver assistance systems feature improved control mechanisms.

Appropriately high UK specification
In the UK the new A7 Sportback is initially based around two specification levels – Sport and S line – and two engines classified according to the new Audi naming convention first introduced in the new A8 luxury saloon. The 55 TFSI is powered by a petrol V6 TFSI offering 340PS and 500Nm. From rest, 62mph is reached in 5.3 seconds and its top speed is 155mph. In terms of efficiency, up to 40.4mpg combined is possible, with a CO2 low of 158g/km. A 50 TDI variant is also available, utilising a V6 TDI diesel that delivers 286PS and 620Nm of torque. It enables the A7 Sportback to reach 62mph in 5.7 seconds and a 155mph top speed. Combined fuel consumption peaks at 50.4mpg, corresponding to 147g/km of CO2.

Technology features common to both levels will include the fully digital Audi Virtual Cockpit, MMI Navigation Plus with MMI Touch, the Audi Smartphone Interface and the Audi Phone Box with wireless charging for QI-enabled compatible phones. The list of electronic driver assistants will also feature the Audi Parking System Plus with rear-view camera, the Audi Pre-sense Front collision warning and automatic braking system and the Lane Departure Warning system.

Another core component of the standard technology package benefiting all A7 Sportback models is the new mild hybrid drivetrain (MHEV) made possible by the newly introduced 48-volt primary electrical system.

At speeds of between 34 and 99mph, it enables the V6 engines to be deactivated and the A7 Sportback to coast in freewheeling mode. The Belt Alternator Starter (BAS) re-fires the engine smoothly and comfortably after coasting, and is capable of channelling up to 12kW of energy back into the lithium ion battery during recuperative braking.

The start-stop function has also been significantly expanded and now activates at 13mph. In combination with the standard front camera, the engine is restarted predictively while at a standstill as soon as the vehicle ahead begins to move. In real-world driving, the MHEV technology reduces fuel consumption by up to 0.7 litres per 100 kilometres.

quattro with ultra technology
The two engines work with a seven-speed S tronic twin-clutch transmission (55 TFSI) and an eight-speed tiptronic (50 TDI), and their outputs are proficiently managed by the latest iterations of the quattro drivetrain. For the TFSI engine, the efficient quattro with ultra technology will channel drive to the rear wheels in a split-second when necessary.

The drivetrain with its equally weighted comfort, efficiency and performance focus is complemented by a platform developed according to the same philosophy. The new electronic chassis program (ECP) – the central controller for the chassis – and the four suspension options including updated adaptive air suspension make the car feel supple and luxurious during cruising without curbing its ability to iron out more challenging roads.

Many aspects of the core suspension concept have been newly developed. Sport models feature an absorbent yet tightly controlled conventionally sprung set-up, while S line versions feature the sport suspension that lowers ride height by 10 millimetres. Steel-sprung suspension with electronically controlled damping and the self-levelling adaptive air suspension are available as options for both variants.

Progressive steering with a ratio that becomes more direct as lock is applied is standard, and has been reworked with a focus on providing more detailed road surface feedback.

For optimal ability through the switchbacks and increased lower-speed manoevrability dynamic all-wheel-steering is also available from the options list, as is the quattro sport differential which actively distributes drive torque between the rear wheels for maximum cornering adjustability.

The various options are all integrated into the control function of the electronic chassis platform (ECP). These systems are closely networked for maximum precision. The driver can use the Audi drive select system to activate different drive profiles in which the differentiation between comfort and dynamic options is more pronounced than in the previous model.

Drink driving related accidents are on the rise. In fact, research has found a 5% increase over the last five years. Here at Leasing Options we’ve been