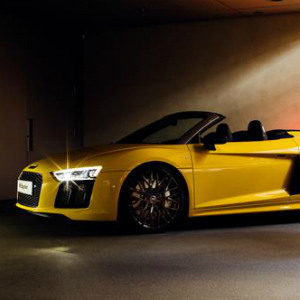 A landmark Audi location in the heart of London is the fitting backdrop for the UK debut of a new generation of the convertible super sports car lauded as a milestone for Vorsprung durch Technik – the all-new Audi R8 Spyder has taken centre stage for selected media guests at Audi City in Piccadilly. Appealing to purists with its naturally aspirated V10 power, and to technophiles with sophisticated new features including the fully digital Audi Virtual Cockpit, the latest open-air R8 is not only more powerful and quicker against the clock, but also even more tightly pinned to challenging roads thanks in part to a 50 per cent improvement in torsional rigidity.

The key point of differentiation between Coupe and Spyder R8 models is of course the lightweight cloth hood, which tapers into two fins that stretch the cloth so that the roof harmonises perfectly with the dramatic lines of the high-performance sports car. Opening and closure is fully automated, and at speeds of up to 31mph the hood can be slickly concealed beneath the sculpted integral cover, or reattached to shield occupants from a sharp shower, in just 20 seconds. The rear window, sunk into the bulkhead, can also be retracted and extended at the touch of a button.

The strong backbone of the new R8 Spyder is the newly developed multi-material Audi Space Frame (ASF) which incorporates an intelligent mix of aluminium and carbon fibre that helps to keep dry weight down to just 1,612kg. Aluminium components make up a fraction under 80 per cent of the weight. They form a lattice that Audi’s engineers have used to incorporate specific reinforcements especially into the sills, A-pillars and windscreen frame. Combined with innovative manufacturing methods that lower the weight of individual components by up to ten per cent, these pare the weight of the body back to just 208 kilograms and boost torsional rigidity by over 50 per cent compared with the previous model.

The even greater structural integrity provides an even more effective operating environment for a new iteration of the potent mid-mounted ten-cylinder engine.  The latest V10 retains the purity of natural aspiration but adds advanced features such as dual injection and a freewheeling mode which enables it to ‘decouple’ whenever possible to optimise response and improve fuel economy by ten per cent. 540PS of power and 540 Nm (398.3 lb-ft) of torque at 6,500 rpm deliver phenomenal road performance, with the 0 to 62mph sprint taking just 3.6 seconds on the way to a top speed of 197mph, but the latest R8 Spyder is also capable of returning up to 24.1mpg, corresponding to 277 grams CO2 per kilometre.

Behind the V10 there is a seven-speed S tronic dual-clutch transmission delivering lightning-fast shifts, which channels power to a newly designed quattro drive system with an electro-hydraulically activated multi-plate clutch at the front axle. It can distribute drive fully variably according to the situation, and in extreme cases can transfer up to 100 percent to the front or rear wheels.

The intelligent control system is incorporated into the Audi drive select system, which offers four modes ranging from overtly dynamic to comfort-oriented. In conjunction with the optional R8 performance leather steering wheel, three more driving programs are available: dry, wet and snow. They make handling even more precise and stable, to match the specific conditions of the road being travelled.

The controls place the focus squarely on the driver, who can operate all important functions with the multifunction and satellite push-buttons without having to take hands off the steering wheel or look away from the road. The large 12.3-inch, fully digital Audi virtual cockpit presents all information using rich 3D graphics.

The internet-based services delivered by Audi connect come as standard in the R8 Spyder, as does the intuitively operated MMI navigation plus with MMI touch, the Audi Music Interface and belt microphones which make it even easier to use natural-language voice control and the phone. MMI search, which makes search suggestions after input of just the first few letters, offers a shortcut to the required information.

The Audi smartphone interface, which made its debut in the Q7 and A4 model lines, is also adopted by the second generation R8 Spyder. It enables selected content from compatible iOS and Android smartphones to be displayed by the Audi virtual cockpit. The Audi phone box can also be specified to connect mobile phones to the car aerial and charge them inductively. The Bang & Olufsen Sound System is another highlight: For the first time, it plays through two head restraint loudspeakers mounted in each seat, for an excellent audio experience even when driving with the hood down.

The build quality of the new R8 Spyder, which is largely hand-built at a special facility near Neckarsulm, Germany, is of the highest standard. Over and above the extensive standard equipment, customers have almost unlimited scope to tailor both the interior and exterior to their individual preferences. Body components such as the front spoiler, the diffuser and the new sideblades are also available in carbon. LED headlights with newly developed laser technology can be added as an alternative to the standard all-LED headlights to maximise visibility and range for the driver, bringing increased safety at night.

The all-new R8 Spyder is making an early curtain call in London before becoming available to order later this spring. The first examples of the open-air super sports car will reach UK customers in late 2016.