How much do you know about stopping distances 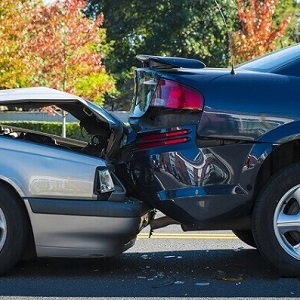 In a recent survey of AA members, tailgating was voted the single most irritating driving habit.  More than a quarter of motorists asked, said other vehicles driving too close made them stressed and angry. Tailgating is illegal and while it is always dangerous, it’s particularly reckless at this time of year, when there may be wet or icy road conditions.

Interestingly, research published last year by the Massachusetts Institute of Technology confirmed that tailgating really doesn’t get you to your destination any quicker.  In fact, speeding up and slowing down in heavy traffic actually causes jams, particularly on motorways.

Of course, there are always some determined tailgaters on every road, whose aggressive driving style means they are quite happy to put their lives and others at risk.  But most drivers who get too close to the car in front are ‘unwitting tailgaters’.  They are not concentrating properly, or have an unrealistic view of their ability to stop in an emergency.

The stopping distances we all learned when we passed our driving test are for an average sized family car in normal weather conditions.  During the winter months driving conditions are rarely good and your van is probably heavier than a car.  So, as a professional driver, it’s vital that you take stopping distances seriously.

Stopping distances are made-up of two elements – thinking time and braking time.  Even the most experienced driver needs time to react to a hazard in front of them.  According to the Highway Code, when driving at just 20mph, it takes six metres for your brain to react and tell your foot to hit the brake.  At motorway speeds, thinking time increases to a staggering 21 metres. 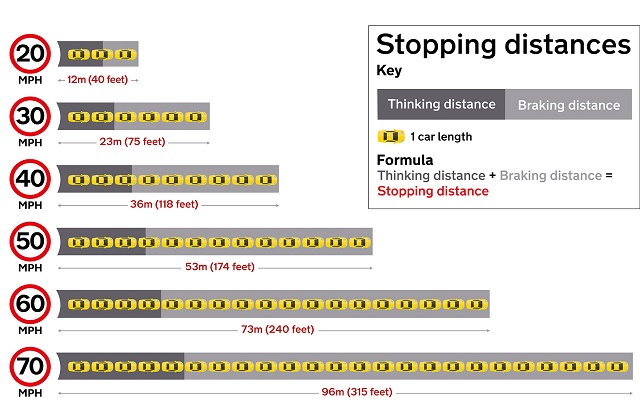 The braking time is the distance your van will continue to travel as you press your foot on the brake, before it comes to a halt.  According to the Highway Code at 20mph this is 6 metres, while at motorway speeds it will take 75 metres for an average-sized family car to stop.  A larger or heavier van will take even longer.

The condition of your vehicle will also have an impact on stopping distances.  According to the RAC, factors such as tread depth, tyre quality and inflation will all have a dramatic effect.  The quality and wear of the brake pads is also significant.  Unless your vehicle is in near perfect condition, all these factors will reduce your ability to stop quickly.

Judging distance in practice can be difficult, but you can always use the two-second rule which is recommended in the Highway Code. As the vehicle in front passes a fixed point, such as a sign or a bridge, start to say the phrase ‘Only a fool breaks the two-second rule’ at a normal rate.  The words take about two seconds to say, so if you pass the same fixed point before you’ve finished, you’re too close.  Government advice says in wet weather you should double the distance and make it even bigger in icy conditions.

So next time you get behind the wheel, take a moment to review your stopping distances.  Check yourself with the two-second rule and make sure you’re not an ‘unwitting tailgater’.

Results from a new driving simulation game reveal that the vast majority of people don’t know when to hit the brakes — with many failing to get it right on their second or even third attempts. You can see how your skills compare using the game here

Ned Siegfried, President of Siegfried & Jensen, comments: “This game is a fun reminder about safety behind the wheel, but failing to react quickly enough when driving in real life is anything but fun.”