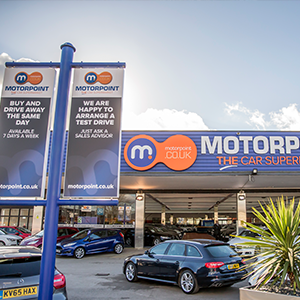 The UK’s leading car supermarket, which is set to open its twelfth site in Sheffield next month, is not only offering the 1.2 TSI S 5dr version of the perennially-popular family hatchback for £11,999, a saving of £6,226 off UK list price, it is now also saving customers up to £110 a year in Vehicle Excise Duty.

The Government recently announced changes to Vehicle Excise Duty from April 1 onwards. As a result drivers will see significant increases in the cost of road tax for both new petrol and diesel cars. To avoid this happening Motorpoint has pre-registered its entire stock of new delivery, mileage VW Golf’s to ensure anyone buying one of its models only pays £30 a year – instead of the standard £140 a year.

Mark Carpenter, Managing Director of Motorpoint, explained: “As the Car Buyers Champion Motorpoint has decided to pre-register its stock of delivery mileage VW Golf’s to save its customers the additional costs associated with the planned changes to Vehicle Excise Duty next month. This equates to a saving of £110 a year for the time that the customers owns that particular vehicle.”

Motorpoint, which has a network of branches through England, Scotland and Wales, recently became the first car supermarket in the UK to receive a Gold Service Award from Feefo, the Global Feedback Engine. The company was singled out by the globe’s most trusted supplier of ratings and reviews for delivering exceptional customer service during 2016.