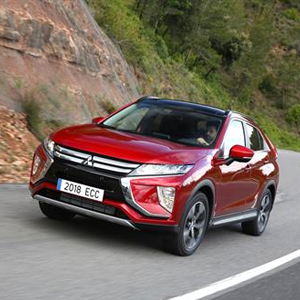 With its official UK launch still five months away, the Mitsubishi Eclipse Cross has already been shortlisted for the prestigious Golden Steering Wheel Award in Germany.

The forthcoming model is nominated in the highly-competitive Small SUV category of the annual awards, which are compiled by Auto Express magazine’s sister title, Auto Bild.

The Golden Steering Wheel awards identify the best new cars across five different categories. After the initial nominations, the public are invited to vote for their favourites. Following this, the finalists from each category are put through their paces by a panel of expert judges from the UK, Germany and France. After rigorous evaluation, the winners are announced.

People can vote for the Mitsubishi Eclipse Cross, which has already attracted much attention for its style, performance and refinement since its global unveiling at the 2017 Geneva International Motor Show.

Lance Bradley, Managing Director, Mitsubishi Motors in the UK, said: “The Eclipse Cross has generated a huge amount of interest and this nomination proves just how eagerly awaited it is as well as the impact it is destined to have on its segment. It’s already amassed thousands of admirers and we’re looking forward to seeing their enthusiasm turn into a lot of votes.”

The new Mitsubishi Eclipse Cross represents a new direction for the brand – it brings Mitsubishi Motors into the mid-size SUV class for the first time and immediately sets itself apart with its expressive and bold design, cockpit-like interior, sharp driving dynamics and advanced technologies.

The Mitsubishi Eclipse Cross will go on sale in the UK in January 2018 with pricing and UK specifications announced closer to launch.