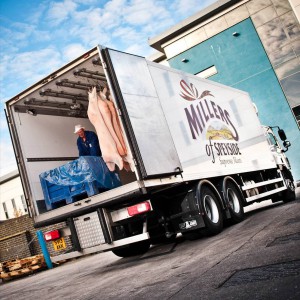 The latest ‘meat railer’ to wear Millers of Speyside livery is based on a DAF FAS CF75.310 6×2 rigid chassis supplied by Norscot Truck & Van Aberdeen.

It has a Carrier Supra 850 single-temperature refrigeration unit and five Furgocar meat rails with hooks running the length of the 8.4metre body.

The vehicle is additionally fitted with a set of rear-mounted, folding steps, affording Millers’ drivers easy access to the load area.

Duncan Reid, General Manager at Millers of Speyside, said: “We’ve been running vehicles with Gray & Adams bodies for at least 15 years now, and they’ve never let us down.

“With heavy carcasses swinging from the rails it’s important that the side walls, bulkhead, floor and roof of the body are sufficiently reinforced to withstand the pressures, so they don’t bend or worse.

“Gray & Adams clearly know their business inside out, because we’ve never had an issue with one of their bodies.

“The build quality is always first class and the same is true of their after sales service, while it’s also a pleasure to be doing business with another local company.”

Gray & Adams’ meat rails can be specified with hook covers which allow the hooks to be stowed against the underside of the roof, reducing the risk of damage.

The manufacturer has also designed vehicles with built-in meat-loading cranes.

As well as fitting meat rails in new bodies, they can retrofit systems to older vehicles.

Millers of Speyside sell pork and lamb, but are best-known for their premium-quality, grass-fed beef, hung and aged on the bone for up to 21 days prior to production.

A member of the Quality Meat Scotland (QMS) assurance scheme, Millers of Speyside obtain all products from reliable, established sources.

Millers also have a thriving export operation which dispatches weekly consignments throughout most of Europe and as far afield as Ghana.