Military ‘Jackal’ to feature at the Confused.com London Motor Show 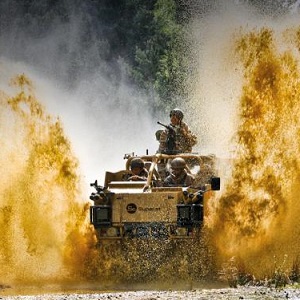 Globally renowned specialist developers of military vehicles, Supacat, will be displaying its HMT400 `Jackal` this May at The Confused.com London Motor Show.

Branded as the ‘Jackal’ by the British Armed Forces, it is a supremely versatile platform with unparalleled cross-country performance. Already well proven in the harsh terrain of the Afghanistan battle ground, the`Jackal` has a unique air suspension system that allows ease of driving over the roughest ground and also enables tactical loading within a CH-47 Chinook.

These specialist military vehicles are built to fend off mine blasts and ballistic attacks. The ‘Jackal’ can also be equipped with a variety of mission-specific weapons and communications to suit a wide range of operational roles.

Designed in the late 1990s to meet military needs for a light to medium load carrier, HMT variants have earned the reputation as formidable and unrivalled off-road vehicles. Now forming part of the British Army’s core fleet, HMT vehicles are in use with elite special forces around the world.

Alec Mumford, Chairman of The Confused.com London Motor Show, said: “As the UK’s only remaining independent designer and developer of military vehicles, we are proud that the Devonshire-based Supacat will be showing the `Jackal` on our ‘Built in Britain’ feature. Supacat are arming our nation’s forces with vehicles to tackle the most testing terrains. The ‘Jackal’ will be among many more examples of national automotive excellence at the all-new ‘Built in Britain’ area.”

Tickets are currently £18.50 and one child (under 17) goes free with a paying adult. They’re on general sale now and available to purchase at  www.thelondonmotorshow.co.uk