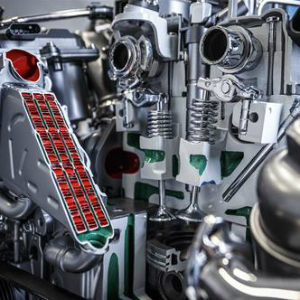 With its completely newly developed family of diesel engines, Mercedes-Benz is the first manufacturer to put diesel vehicles on the market that already fulfil the stricter emission limits planned for the EU as of September 2017. This has been achieved through an integrated technology approach, which includes new stepped combustion chambers and further developed exhaust-gas recirculation. The new engine design also allows all components for exhaust-gas recirculation to be positioned directly on the engine, instead of under the car floor as previously. This significantly enhances the system’s overall effectiveness – largely independently of ambient temperatures and driving style.

The market launch of the completely newly developed four-cylinder diesel engine OM 654 is in the new E-Class. The E 220 d now consumes as little as 3.9 litres of fuel per 100 kilometres (combined according to the NEDC currently prescribed for all manufacturers), although the engine is more powerful than its predecessor [72.4 mpg] (143 kW/195 hp compared with 125 kW/170 hp). This corresponds with CO2 emissions of 102 grams per kilometre.

The new four-cylinder engine is the first member of a modular engine family that will be applied throughout the entire portfolios of Mercedes-Benz Cars and also at Mercedes-Benz Vans. Several levels of power output are planned, as well as longitudinal and transverse installation in vehicles with front-, rear- and all-wheel drive. In this way, Mercedes-Benz will equip its entire range of diesel cars in Europe with this latest engine generation including SCR technology (selective catalytic reduction) by 2019 at the latest.

“Our customers’ trust is very important to us and we take our responsibility to the environment very seriously,” explained Prof. Dr. Thomas Weber, Daimler Board of Management Member for Group Research and Mercedes-Benz Cars Development. “That’s why we decided five years ago to invest massively in the further development of diesel technology. But we are also continuously making our gasoline engines more efficient and more environment-friendly; because high-tech combustion engines will remain the backbone of individual mobility until the widespread market success of electric vehicles. For this reason, we are investing a total of about three billion euros to ensure further improvements in fuel consumption and emissions – in both future and current vehicles.”

In addition to their good fuel consumption, the new family of diesel engines also has the advantage of particularly low nitrogen-oxide emissions. That has now been confirmed by independent measurements by DEKRA, a German vehicle inspection company. The DEKRA experts carried out an extensive test program with a Mercedes-Benz E 220 d. The focus was on Real Driving Emissions (RDE), the method prescribed in the EU as of September 2017 in addition to measuring emissions on the test bench.

The RDE dynamic test program covers various stretches of road that include urban streets, country roads and freeways. The measurements were carried out at various temperatures between about two and 16 degrees Celsius, and with various numbers of occupants and varying loads. As a result, the E 220 d emitted less NOx than the limit of 80 mg/km on all applicable RDE routes. In some cases, the NOx emissions were at the very low level of between just 13 and 21 mg/km even at low ambient temperatures.

The Mercedes-Benz engineers made use of the newly gained knowledge from the development of the new family of diesel engines also to continually improve the emissions of current vehicle models. That includes optimisations with regard to turbochargingand the further development of fuel injection and intercooling, as well as the application of new materials such as chromised timing chains. The combination of these measures results in improved robustness of the parts and components that are subjected to particular stress by combustion and exhaust-gas recirculation. The operating range of exhaust-gas recirculation has been extended towards significantly lower temperatures. Another factor is the increased efficiency of the SCR systems. This has been achieved by modifying the design of the exhaust system and by applying new catalyst materials. This entire package of measures is now being successively applied in series production.

With the entry-level engines of the compact cars (A- and B-Class and the CLA and GLA) and with the V-Class, Mercedes-Benz is offering the recent improvements as a software update on cars already in customers’ hands in the context of a voluntary service action to be implemented in the coming months, starting with the V-Class in June.

Gasoline engines with particulate filters in the future

Thanks to a large number of development advances, diesel engines’ emissions of particulate matter have been continually reduced in recent years. Also many of the modern Mercedes-Benz gasoline engines already emit lower levels of particulate matter than the limits to be introduced in the future. This is achieved by means of modifications within the engines as well as through the application of piezo injectors.

For the further improvement of environmental compatibility, Mercedes-Benz plans the large-scale use of particulate filters also for gasoline engines – the first manufacturer to do so. After more than two years of positive field tests with the Mercedes-Benz S 500, additional versions of the S-Class with gasoline engines are to be equipped with this new technology with the next model upgrade. That will be followed by gradual implementation in further new models, model upgrades and new engine generations. After that, particulate filters will also be applied in the current model ranges.

Mercedes-Benz Vans UK has launched a range of finance offers to further support the commercial vehicle community, and ensure that pricing is transparent and suitable for various

How fleet managers can best...

Shops, restaurants and many other businesses are beginning to

According to the latest figures from Geotab and Webfleet