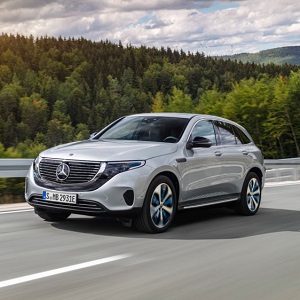 Mercedes-Benz has launched its first production electric vehicle as the industry ramps up its assault on Tesla. Dubbed the EQC, it is just the first in a long line of Mercedes EVs that will swamp the market in the next five years.

The EQC shares basic underpinnings with the tried and tested C-Class and GLC SUV.

The mid-size electric SUV will go head-to-head with the likes of the Tesla Model X and the coming Jaguar I-Pace, due in October.

The EQC follows a similar format to the all-wheel drive Tesla and Jaguar with an electric motor powering each axle. The dual electric motors endow the SUV with deep power reserves making a combined 300kW and 765Nm.

An 80kWh battery gives the EQC a claimed range of more than 450km. The vehicle can be charged at home via regular power point or a Mercedes-Benz installed Wallbox for increased speed. 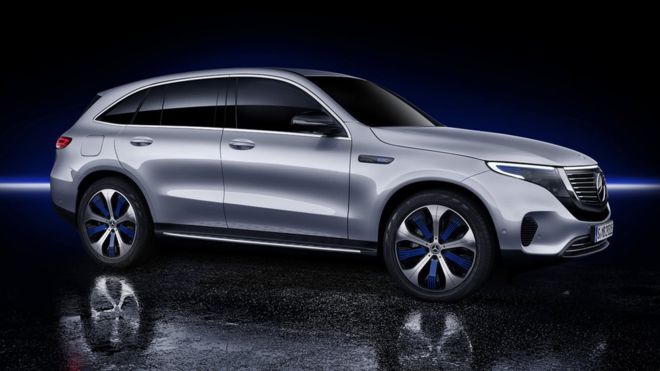 However, selection of the Comfort, Eco, Sport and Max Range driving modes will have a big bearing on how far that charges lasts. In the more economical modes, the EQCs uses a haptic accelerator pedal, which vibrates to prompt the driver to take the foot off and coast.

The EQC features the brand’s latest cockpit format, which is dominated by two large digital monitors running lengthwise along the dash.

Its infotainment tech, known as MBUX (Mercedes-Benz User Expereience) employs artificial intelligence to learn a driver’s habits and preferences to tailor the infotainment and in-car functionality to suit.

MBUX can understand that a driver prefers certain radio stations at different times of the day or often makes particular phone calls on the way to or from work and will send pertinent prompts.

Production of the EQC is due to start next year and Australian deliveries — with prices tipped to start from about $100,000 — are most likely to arrive at the end of 2019 or early 2020. Full details will be revealed closer to the local launch date.

However, this is just the beginning for Mercedes-Benz. The EQC is just the first of 10 electric models planned to enter production by 2022.

Next up is the EQA compact hatch. The urban focused EV, shown in concept form at the 2017 Frankfurt motor show, is expected to be revealed in production guise next year.

“With the EQC — the first fully electric SUV from Mercedes-Benz — we are flipping the switch,” says Mercedes-Benz chairman Dieter Zetsche.

“Competition in the electric car market is hotting-up, with Mercedes’ announcement demonstrating its dedication to becoming a key player. However, while the automotive industry and new electronics players, like Dyson, continue to invest heavily in developing prototypes and putting them through their paces, adoption rates will be slow until the “charging anxiety” for consumers is addressed.

“The UK government has just announced its plans to spend £40 million on research into wireless and on-street charging for electric vehicles. This on-the-go charging will address the one major drawback of electric vehicles – long charge times – and could well spell the widespread adoption of the technology.

“Adopting a “consumers in loop” philosophy, the electric vehicle charging process would significantly benefit from including a system of charging alerts. For example, including location intelligence and data on the number of miles available, manufacturers can help lower the anxiety around running out of charge.”