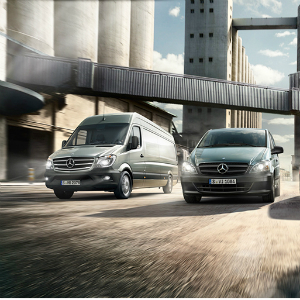 Caledonian Truck & Van hit the trophy trail for a second year running when it picked up more prestigious prizes at the latest Mercedes-Benz Truck Dealer of the Year Awards.

The manufacturer’s most northerly franchisee retained the Truck Customer Service & Parts Dealer of the Year title which it won in 2016, while also winning the Mercedes-Benz Financial Services Truck Team of the Year award. There was an individual Gold Award too, for Head of Truck Sales Andrew Rennie.

Underlining its strength in depth Caledonian again made the final three in the main Truck Dealer of the Year category, which it won last year, as well as in those for Service Manager, Truck Sales Manager, and Truck Administration Team of the Year.

Head of After Sales Colin Birnie declared: “Winning these awards and nominations for a second year running is testament to the sustained hard work and investment we are applying to our dealerships across Scotland.

“We have put huge energy into improving our facilities, while also recruiting and training staff of the highest calibre. This has been matched by the determination of our employees to deliver the finest levels of customer service.”

Andrew Rennie added: “Once again our success is down to a real team effort by everyone at Caledonian Truck & Van. We’re hugely grateful for their efforts and for the continued loyalty of our highly valued customers.”

The franchise was taken up by parent company T.O.M Group in 2012. Having previously traded as Mercedes-Benz Commercial Vehicles, the Dealer underwent a recent rebrand when it adopted its new name.

Over the last five years T.O.M. has refurbished and extended the Dealer’s headquarters on Aberdeen’s Altens Industrial Estate, and opened a new, purpose-designed facility on the Balmakeith Industrial Estate, Nairn. Both sites feature DVSA-approved Authorised Testing Facility lanes for truck MoTs, as does the company’s newly upgraded truck and van workshop in Ayr.

T.O.M. Group Franchise Director Vincente Connolly added: “Being nominated in no fewer than seven categories, and winning three important awards, represents a stunning performance. Our customers can rest assured, though, that we won’t be taking our foot off the gas. We’ll continue to push as hard as we can to bring them the highest possible levels of service.”