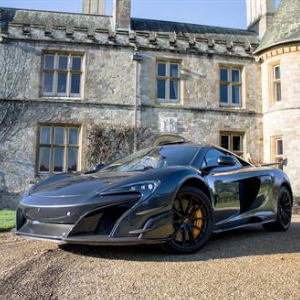 Every supercar fan’s dream, the 2016 McLaren MSO HS is a new arrival which has roared into the National Motor Museum to go on show at Beaulieu.

One of only 25 built, the very special McLaren boasts an exceptional turn of speed, stunning styling and masses of horsepower making it a guaranteed design classic.

Each MSO HS was built to its own unique specification by the McLaren Special Operations division, to suit its owner. The MSO HS that has parked up at Beaulieu is number seven of this limited production run, made all the more special by being one of only six built with right-hand drive, and it is the only road-going version to be finished in subtle charcoal grey.

To build this enhanced and improved machine, British supercar builders and F1 racing campaigners McLaren used their already-rapid 675LT model as their base.

Performance is boosted by an impressive power hike and dramatic weight-saving measures, including numerous carbon fibre panels, polycarbonate engine cover and a titanium exhaust system. A redesigned front bumper and splitter complement a huge rear wing, which is electronically adjustable and becomes an air-brake when needed.

Producing 679bhp from its 4-litre twin-turbocharged V8 engine, this stunning feat of engineering can storm to 60mph from rest in just 2.8 seconds, then go on to reach a top speed of 203mph.

Denoting ‘High Sport’, the letters HS in its name are very apt, and the car is just the ticket for action on the track or a high-speed blast.

The loaned McLaren MSO HS can now be seen up-close in the National Motor Museum as part of the Beaulieu collection, featuring more than 250 vehicles which tell the story of British motoring history.