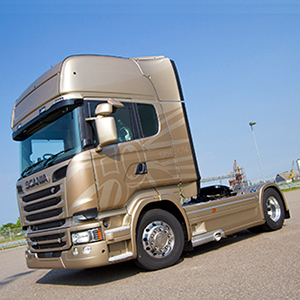 The Golden Griffin, which itself was released to mark Scania’s first 50 years in the UK, is limited to just a half-century of examples.

Ballymena-based McBurney, who celebrate their own landmark in 2015, have opted for Golden Griffin number 50 from the range.

Norman McBurney OBE, Managing Director of McBurney Transport, said: “I couldn’t think of a better way to celebrate my own 50 years in business than by buying Golden Griffin number 50.

“It is now more than four decades since I purchased my first Scania and over the years the marque has played an important role with our fleet.

“I would like to congratulate Scania on reaching its own UK half century and now look forward to celebrating our own 50th anniversary.”

Every Golden Griffin model is equipped with Scania’s luxury Griffin pack and a wide array of extras ranging from a kitchenette to a TV/DVD player.

All Golden Griffins will also feature a wide range of active and passive safety features, including Lane Departure Warning, Adaptive Cruise Control and Advanced Emergency Braking, and each truck will be equipped with a state-of-the-art entertainment system.