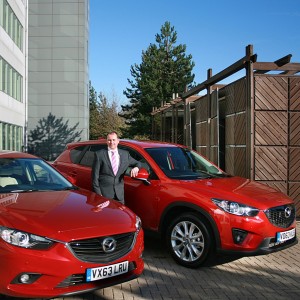 Mazda are hailing the influence of their SKYACTIV technology after fleet sales rocketed by 84% in the first nine months of 2013/14.

The huge rise, against a total fleet car market increase of 7%, is expected to move even further with the release of the Mazda3.

Demand for the Mazda6, featuring SKYACTIV technology, was enormous in 2013, while the CX-5 has also been instrumental in boosting fleet figures.

Steve Tomlinson, Head of Fleet at Mazda, said: “The introduction of SKYACTIV technology has delivered a fleet renaissance for Mazda.

“The Mazda6 has become the car of choice in the fleet sector and we anticipate demand to further increase given the autumn introduction of a 2.2litre SKYACTIV-D 150PS engine with emissions of just 104g/km.

“This pushes the model down a tax band thus delivering greater financial savings to businesses and drivers alike alongside improved fuel economy.

“Corporate sales of the Mazda6 are being well supported by demand for the Mazda CX-5 and with the all-new Mazda3 set to deliver volume in the important lower medium segment, 2014 will be an exciting year for Mazda in fleet.”