Maserati At The Auto E Moto D’epoca Show In Padua 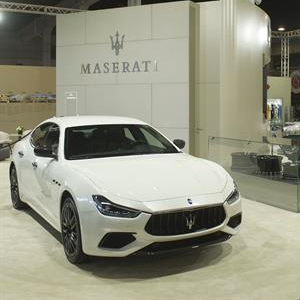 Maserati is exhibiting at the Auto e Moto d’Epoca Show in Padua, Europe’s biggest classic and contemporary car and motorbike fair. The event, in its 34th edition this year, opens today and will welcome visitors until Sunday 29 October.
Maserati Classiche has chosen three cars for display on its stand in hall number 1 at the Show:
A6 1500. The A6 1500 was Maserati’s first road model. The project originated in Modena in 1941 and the car’s development continued even during the dark years of the Second World War, being officially launched at the Geneva International Motor Show in 1947. The car, featuring not only Pininfarina’s design but also the major innovation of a round-section tubular chassis, was an immediate success with the specialist press and the public, encouraging Maserati to put it into production at once. However, the line was revised and the hidden headlamps were replaced with a conventional design with chromed surround. The “Extra Lusso” version was subsequently equipped with a more modern grille and larger side windows.
5000 GT Allemano. The 5000 GT was presented at the 1959 Turin Motor Show and was the undisputed queen of the event. The car, with coachwork by Touring, was nicknamed the “Shah of Persia”; only 3 of this variant were ever built, but they were sufficient to further reinforce Maserati’s revered status on the world market. The following year, 1960, the 5000GT was presented at the Geneva Show with some revisions to its engine, which was made more “docile” for everyday use, while retaining impressive performances. As the partnership with Touring drew to an end, other illustrious coachbuilders joined the project: Pininfarina, Monterosa, Ghia, Frua, and Allemano, who eventually monopolised output, supplying Maserati with most of the bodies.
A6G-54 Allemano. The A6G-54 was another high-performance car with medium-sized engine used both in road version and in a more extreme variant destined for the racing scene. Top coachbuilders including Zagato, Frua and Allemano were commissioned to build bodies for the car. Zagato delivered coachwork of aggressive, functional design, hand-crafted with the details different on every unit supplied. Frua chose to adopt a high degree of personalisation of the two models (Coupé and Spyder), expressed in daring colour combinations. Allemano created elegant, streamlined cars, built to the meticulous standards expected of the most luxurious GT models.

As well as the three exclusive classic Maserati cars, the Brand is exhibiting a new Ghibli GranSport MY18, inspired by its great racing tradition. The new GranSport trim is designed to satisfy the demands of customers in search of a sportier personality in the high-end sedan segment. As well as the Full LED adaptive headlights, the GranSport’s exterior is also characterised by Black Piano inserts on the front bumper (which also carries the “GranSport” name), side skirts coloured to match the car, blue inserts on both the Trident and the Saetta logos, Red brake callipers and 20″ Urano diamond wheels.

For lovers of a sporty driving style, the cockpit has all-leather racing seats with 12-way electric adjustment and sport steering wheel. The GranSport’s standard outfit is completed by the gearshift paddles on the steering wheel and the steel sport pedals. As an additional customisation, to underline the Ghibli’s racing pedigree even more strongly, customers can opt for an optional carbon fibre exterior pack comprising rear-view mirrors, B- and C-pillar claddings and door handles for the basic trim, with the front and rear splitters added for the GranSport trim.

The new Ghibli MY18 is also available in the GranLusso trim, where the sophistication of the car’s equipment is reflected in the use of exclusive materials and special contents, in the tradition of the finest Italian craftsmanship.

Representing the prestigious association with Bulgari, the Trident stand displays the two new Octo Maserati watch models, officially presented at the 2017 Frankfurt Motor Show. The new Octo Maserati GranLusso and GranSport by Bulgari are exclusive watches specifically intended for owners of the Brand’s cars; the spectacular dial (with retrograde minutes and jumping hours) resembles the rpm-counter of a Maserati, while the stitched leather strap recalls the upholstery.

A model of the new limited-edition collection of bicycles designed by Montante Cicli exclusively for Maserati will also be on show for visitors to admire. The project celebrates some of the most famous of all Maserati classic cars, with the creation of 4 models in vintage bike style, inspired by the 250s (1957), the 450s (1957), the 3500GT (1957) and, finally, the Maserati Ghibli (1967), the inspiration for the model on show.

Maserati Store is also present with a wealth of products, especially the “Maserati Classiche” line, inspired by the heritage car world, with the Brand’s most iconic historic cars featuring in the patterns and patches which decorate the garments.

The “Maserati Classiche” department, which has curated the Brand’s participation at the Show, is an in-house entity entirely dedicated to classic Maserati cars and the promotion of the company’s immense historic heritage.

Maserati also recently introduced major product upgrades to all its models for the recent Frankfurt Motor Show, making the new MY18 range even more complete and sophisticated.

All Maserati models have been significantly upgraded with the addition of new, high-tech contents. For the first time, Maserati introduces Electric Power Steering (EPS), which enables the active functions of the new Advanced Driving Assistance Systems (ADAS). EPS has replaced hydraulic power steering on the Ghibli, Quattroporte and Levante, to provide a higher level of handling and comfort while retaining all the steering precision and “feel” typical of every Maserati.

The GranTurismo and GranCabrio MY18 models have also undergone major external restyling for even more superlative aerodynamics, while the interior upgrade includes the introduction of a new infotainment system.