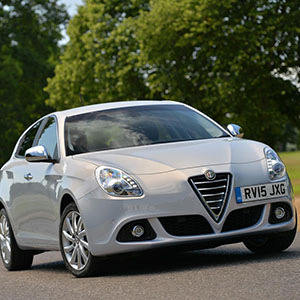 The Alfa Romeo Giulietta engine range has been revised to offer improved economy and emissions across the entire petrol and diesel engine range.

Of key interest to both private buyers and business users, the popular 1.6 JTDM-2 turbo diesel engine not only benefits from a reduction in emissions from 104g/km to 99g/km, thanks to the addition of a variable-geometry turbo charger and low rolling-resistance tyres, it also brings an increase in power from 105hp to 120hp. The drop in emissions results in a one percent BIK reduction to 17 percent and the annual Road Fund Licence is now £0.

The uprated engine, which complies with strict EU6 emissions regulations, boosts top speed by 6 MPH to 121 MPH, where legally permitted, and improves the 0 – 62 MPH by 1.3 seconds to just 10.0 seconds. At the same time, the new Giulietta 1.6 JTDM-2 can now return 74.3 MPG on the official combined fuel economy cycle, a significant improvement over the impressive 70.6 recorded by the current 1.6 JTDM2 105hp engine.

Indeed, every engine is now compliant with the latest Euro 6 regulations and (with the exception of the recently-introduced 2.0 JTDM-2turbo diesel 150hp) sees its emissions and economy improved, resulting in a one percent BIK reduction on all engines from the entry-level 1.4 Turbo Petrol 120hp to the 1750TBi 240hp TCT unit that powers the high-performance Quadrifoglio Verde version, while the 1.4 MultiAir Turbo Petrol 150hp and 170hp engines slip into a lower emissions band, reducing the OTR price by £130 and annual running costs even further.

Pricing for the Alfa Romeo Giulietta range remains unchanged despite the engine upgrades, with pricing for the 1.4 TB 120hp Progression starting at £18,450 OTR and the 1.6 JTDM-2 120hp Progression priced from £19,500 OTR. Pricing for the Business Edition range, which feature a 6.5-inch touchscreen Uconnect infotainment system with voice activated satellite navigation, 3D mapping and DAB digital radio; front and rear parking sensors; automatic lights and wipers; alloy wheels and metallic paint all as standard, start from just £19,080 OTR for the 1.6 JTDM-2 120hp turbo diesel.