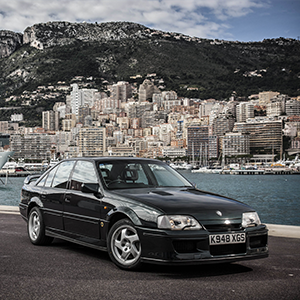 Powered by a 3.6-litre turbocharged engine and capable of a top speed of 177mph, there were calls for the super saloon to be forbidden from British roads thanks to the danger it supposedly presented to ‘family motorists’.

In reality, of course, the Lotus Carlton was every inch a thoroughbred performance car and not the family saloon the newspapers pretended it was in their sensational headlines, and its significance was proven in a more celebratory manner after it was named the most iconic hot Vauxhall ever in a survey carried out by the organisers of the UK’s premier show for the brand’s performance icons.

The Lotus Carlton topped a poll carried out by The Performance Vauxhall Show ahead of this year’s event, which takes place on June 11. Indeed, it was that popular that it took over a third of the total votes, with the Calibra coupe in second place and the Astra VXR completing the top three.

This year’s Performance Vauxhall Show is set to be one of the most action packed yet, with various attractions to draw fans of the British brand’s most thrilling models.

A special 25th birthday display to celebrate the silver anniversary of the Cavalier Turbo will be one of the star attractions, celebrating the Cavalier with attitude. With a 204bhp C20LET turbocharged engine, four-wheel-drive and Chevrolet Corvette-derived six-speed gearbox, it’s now one of the rarest and most cherished of 1990s performance saloons.

At least 10 of the 49 known survivors examples will be on display at the show, from immaculately preserved standard variants to the wildly modified.

The Cavalier feature will be just one part of the ultimate show for fans of hot Vauxhalls, sponsored by Hardrace, Ksport, BC Forged Wheels, BC Supsension and Goodridge, which regularly attracts over 10,000 visitors to the famous drag strip.

With on-strip action, including the chance for owners to enter their own Vauxhalls in a VX-only ‘Run What Ya Brung’, Santa Pod will be spilling over with classic and performance models, be them retro Novas, Chevettes, Cavaliers and Astras, or more modern VX220s, Monaros and VXRs.

As well as the drag strip action, PVS promises a host of other features including entrance photography, a lively retail village for the latest parts, mods and memorabilia, a show and shine, and some of the best and busiest club displays going.

The show itself takes place on the Sunday, but many fans making their annual pilgrimage love to make a weekend of it, so this year PVS is putting on some live evening entertainment, in the form of DJ Pied Piper and MC DT, the sound behind the famous Ayia Nappa hit ‘Do Your Really Like it?”

Camping is available at the show on the Saturday evening, and that’s where the fun really begins. Camping costs £25 per person if booked in advance, with a late night bar and Santa Pod’s funfair in action all evening.

An early bird offer also applies to show day tickets – £18 (plus booking fee), as opposed to £23 on the gate.

For the first time in 2017, there will be a second Performance Vauxhall Show later in the year, which takes place at Rockingham Motor Speedway, Northants, on October 15.