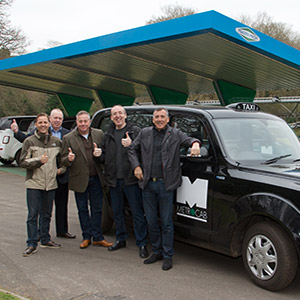 Mr McNamara claimed the vehicle ‘could be a game-changer’, while Mr Davis said it ‘was like nothing I have ever experienced before’.

“I’m a great fan of them and I think they are the future.

“Not just because of the emissions and environment but the silence.

“The worst thing about sitting in London traffic is sitting alongside noisy buses and diesel cars.”

“It’s superb, an absolutely beautiful machine and a masterpiece of British engineering.”

Meanwhile, Mr David added: “Our members drove it today and everyone said they were impressed, amazingly impressed.

“I think the Metrocab gives the cab trade in London a great new future.”

The Metrocab’s REE technology delivers a range of 560km, typically saving a London taxi driver £20-£40 per day based on the average day and night duty cycle in the capital.

They will take to the streets of London this summer in the first real-world trial.

“I have just driven it and it’s totally silent.