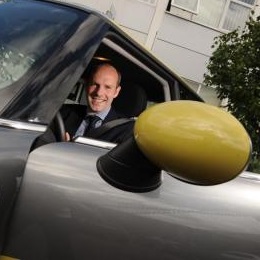 A local MP has been awarded a national road safety accolade after campaigning to reform the way young people learn to drive.

Justin Tomlinson, Conservative MP for North Swindon, was given the award by Brake and Direct Line for his work in helping prevent devastating road crashes.

Mr Tomlinson launched his campaign in June after two horrendous crashes killed three teenagers in his home constituency within the space of a week.

He introduced the Graduated Driving Licence Scheme Bill in Parliament on June 19, proposing 12-month licence restrictions for drivers after passing their tests, limiting the risks they are exposed to.

This would include a zero-tolerance drink drive limit and only being allowed to carry one passenger.

These restrictions would also be supported by graduated learning, with key skills signed off by an accredited instructor before being allowed to book a test.

The Bill secured cross-party support and it was due to have its second reading on October 25.

However, there was not enough time to debate the Bill, and a new date has not yet been announced.

“As a charity that supports bereaved and injured road crash victims, all too often we see families torn apart by these devastating yet preventable deaths and serious injuries.

“Young drivers are more at risk because of a deadly combination of inexperience, overconfidence and peer pressure.

“Introducing them to the roads gradually, through a minimum learning period and restrictions for novice drivers, has been proven to drastically reduce these risks.

“We are delighted to recognise Justin’s work on the issue and will continue to support his efforts until the law is changed.”

He also repeatedly met with Transport Ministers Stephen Hammond and Robert Goodwill, raised questions about young road deaths in Parliament, and wrote about the issue.

Mr Tomlinson said: “With four young people a day either killed or seriously injured on our roads, it is vital we take steps to allow young drivers to gain essential driving experience under lower risk conditions.

“I will continue to press on this issue as not only will it improve safety, but it will also bring down sky-high insurance premiums for young drivers.

“I am very grateful for all Brake’s support in promoting my Private Members Bill.”

Image courtesy of justintomlinson.com, with thanks.