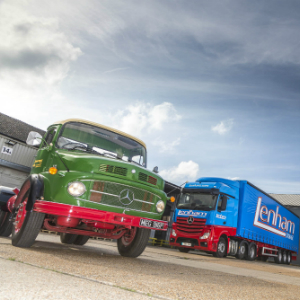 Shared-user distribution specialist Lenham Storage has marked its 70th anniversary by commissioning a Mercedes-Benz tractor unit which wears a special livery highlighting an enduring relationship with the three-pointed star that dates back to the late 1940s.

The eye-catching Actros 2551 has a range-topping GigaSpace cab, the back wall of which features a large format recreation of an evocative black & white photograph – it shows a row of nine Mercedes-Benz trucks purchased by the family-owned operator in 1966, eight years before the manufacturer opened for business in the UK.

Twenty years earlier, in 1946, Reg Tolhurst, a confirmed enthusiast for the German brand and its products, founded his company in the village of Lenham, near Maidstone. Today, Lenham Storage is led by Mr Tolhurst’s grandson, Managing Director Keith Abrehart.

The anniversary unit arrived via Sparshatts of Kent, a founding member of the
Mercedes-Benz Dealer Network, and a supplier of trucks and vans to Lenham Storage for the last 42 years. Underlining the close links between the two companies, Sparshatts’ logo appears proudly alongside the old photograph, and beneath a series of the operator’s own emblems from down the years.

The Lenham Storage fleet includes a ‘bullnose’ Mercedes-Benz 1418 tractor unit from 1976. Fully restored, and resplendent in its green, red and cream paintwork, it makes regular appearances at truck shows and other events.

In 2000, meanwhile, Mercedes-Benz honoured Lenham Storage by presenting Mr Abrehart at its bi-annual Fleet Dinner with the keys to the 100,000th truck it had sold since it launching its UK subsidiary in 1974. The landmark vehicle was also a 6×2 tractor unit, but from the first Actros model generation – the new truck is from the fourth.

And as long ago as 2011 Lenham Storage reinforced its reputation for innovation by trialling the first of a new breed of hybrid drive trucks, a 12-tonne Mercedes-Benz Atego which wore the colours of leading customer Waitrose.

The operator, which also has facilities in Sittingbourne, Aylesford and Andover, provides a comprehensive portfolio of storage and distribution services to customers from across the grocery, beverage and FMCG sector.

Today, as has always been the case, the three-pointed star dominates Lenham Storage’s fleet of 120 trucks, which is split evenly between tractor units and rigids. Its
Mercedes-Benz vehicles are inspected and serviced by Sparshatts under Repair and Maintenance Contracts.

Keeping up a family tradition, driver Charlie Fulcher has named his anniversary Actros ‘Mistress Quickly’, after a character who appears in several Shakespeare plays. Thirty-seven years earlier Charlie’s grandfather, now 85, was working as a driver for another local haulier, and applied the same moniker to his new Mercedes-Benz 1626. It was supplied, of course, by Sparshatts of Kent.

Charlie’s choice of name also reflects the fact that while Lenham Storage normally specifies its Actros tractor units with the popular and highly fuel-efficient 330 kW (450 hp) engine, his own truck has a more powerful, 375 kW (510 hp) straight-six. Its appearance is enhanced by chrome highlights, a painted chassis and alloy wheels, while the special livery was printed and applied by Prolific Graphics, of West Malling.

Operations Director Andrew Fulcher confirmed: “It is only fitting that our 70th anniversary Actros should highlight the important roles that Mercedes-Benz and Sparshatts of Kent have played in the success of Lenham Storage.

“These are professional commercial relationships, of course, but as well as being valued suppliers we like to think of the Sparshatts team in particular as friends. Like Lenham Storage, theirs is a long-established, family-owned business with all that this implies in terms of commitment to customer service.”

He added: “We’re delighted with the new unit, and indeed with all of our Mercedes-Benz trucks. They combine the reliability and durability we have always enjoyed from the brand, with exceptional levels of driver comfort and fuel-efficiency. Gross weights vary enormously so it’s difficult to make direct comparisons, but we also run a couple of new units by another manufacturer and they’re a way behind the Actros when it comes to economy.” 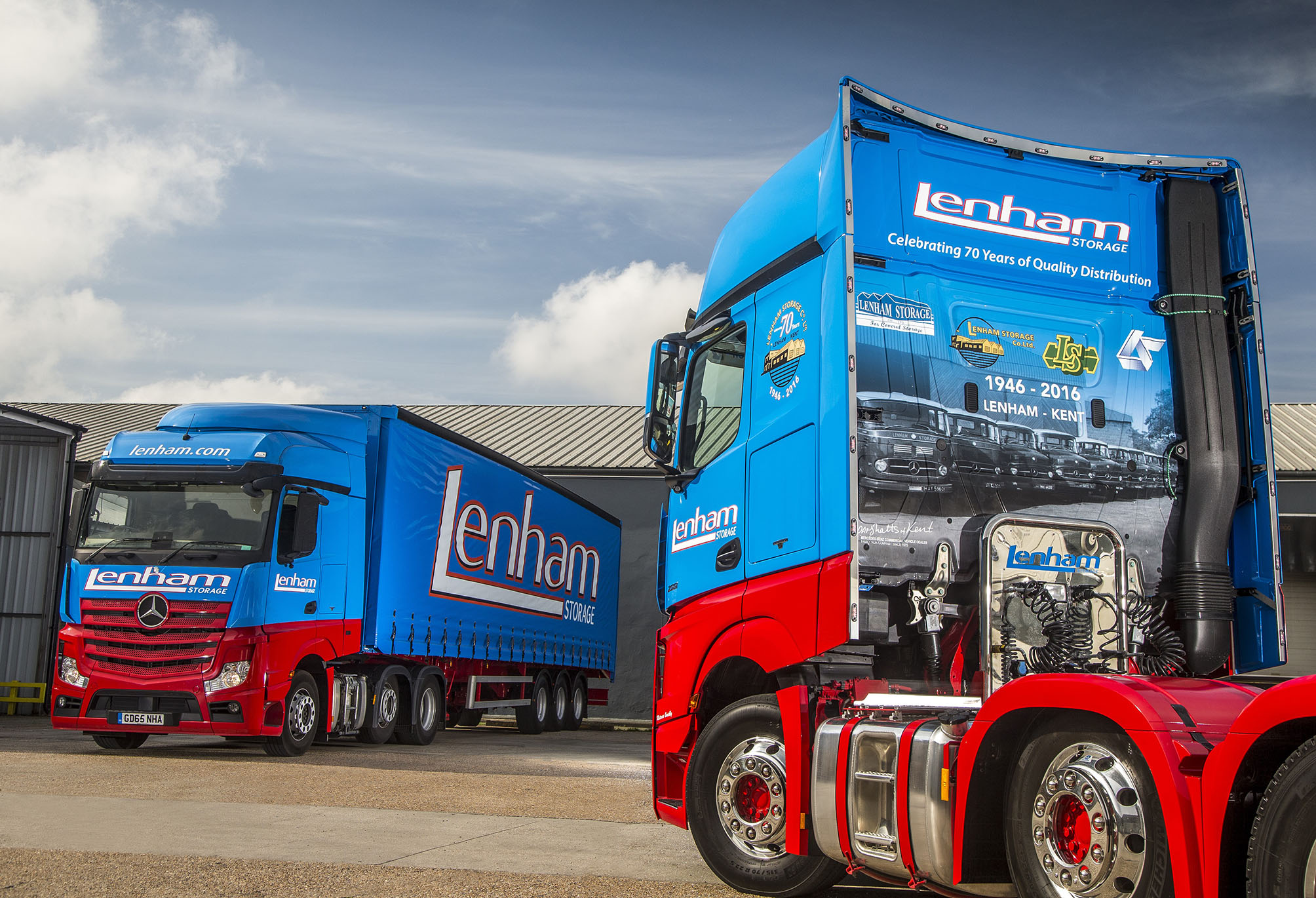