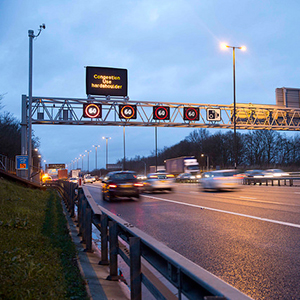 The UK’s latest ‘Smart Motorway’ is now live on the M6.

Between junctions 5 and 8, a ten-mile stretch, the hard shoulder will be opened to traffic during the busiest times, in an effort to cut journey times.

Rob Edwards, Project Manager at the Highways Agency, said: “Drivers will reap the benefit of the government investing more than £111million on this stretch of the M6, with improved journeys and a boost for the economy.

“This scheme brings the latest technology to the M6, despite the difficult engineering challenges we faced with the motorway being elevated.

“More than 160,000 road users stand to benefit each day, now we can open the hard shoulder during the busiest times.”

Neil Taylor, Operations Manager at the West Midlands Regional Control Centre, added: “The information displayed along the motorway has been carefully designed to be intuitive, so drivers should stay alert and follow the information they see.

“They should only use the hard shoulder when there is a speed limit displayed above it.

“If there isn’t a speed limit, or there’s a red X over it, then it’s for emergency use only.”