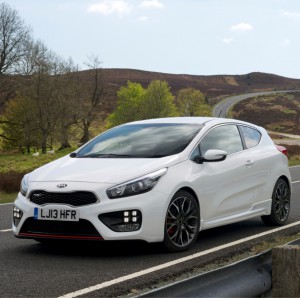 Bosses at Kia are clamouring for models across their range to receive the GT treatment, after launching their first sporty hatchback, the pro_cee’d GT.

The pro_cee’d GT goes on sale next week, but Kia’s UK operation are already hoping similar performance and styling upgrades will grace several other models.

They are convinced that a full line-up of performance-orientated vehicles would help maintain the momentum which has produced five straight years of record sales.

UK leaders believe a performance version of the Sportage may appear within a couple of years, while the Picanto and Rio are further options.

Paul Philpott, UK President and CEO of Kia, said: “The pro_cee’d GT was driven by demand from Europe and with its arrival we are moving on to the next chapter in our history

“In Europe, brands like ours are defined by their C-segment cars, and we now have a model which adds excitement to the range.

“We took it to Motorexpo in London last week and spent the whole day taking city bankers for test drives.”

Performance models are relatively low volume sellers, with Kia expecting to sell between 500 and 750 pro_cee’d GTs in the UK annually.

However, they have an important halo effect on the mainstream cars they are based on, and would help elevate public perception of Kia.

But, with just one all-new car due before 2015 – a replacement for the Soul early next year – additional sporty derivatives would provide a sales boost.