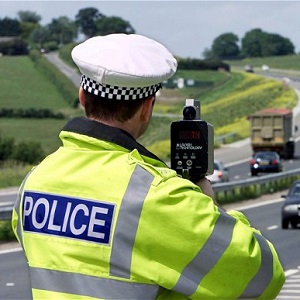 Using an average weekly salary, RAM Tracking has been able to model different estimated fines to work out which industries the new speeding regulations have most likely affected most (and you can try it yourself  here!)

Getting down to the basics

If a driver is caught speeding on UK roads, the minimum penalty is an £100 fine and the deduction of three licence points. – no excuses. The fine usually comes in the post with photographic evidence and drivers will have a set number of days to respond to the notice. If a driver has been caught speeding before or perhaps has broken the laws of the road, their licence may already have existing points on it. The bad news here is that if this has reached nine points, drivers are most likely going to be attending court regardless of what speed they were driving at when caught. For SMEs especially, the cost of a driver being off the road can really affect the dynamic of a small team and their abilty to meet customer needs, so remaining aware of this is important. 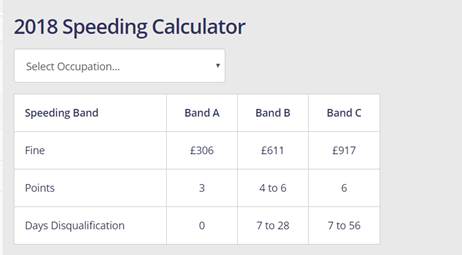 On April 24th 2017, the new fine system came into play. The new system changed from there being a set fine for the amount that was over the limit. Instead, the new system calculates a fine based on speed and now, income. This stricter enforcement means that offenders can be fined nearly up to 175% of their weekly income, depending on how severe the offence was. The severity of the fine is based on three different bands:

With Band C being the worst, it carries the highest fine of around 125-175% of a weekly wage.

Why is thinking about speeding so important?

Research by Green Flag has shown that in the last 5 years, speeding offences have increased by some 44%. Our own research here at RAM Tracking showed that something as simple as the clocks going forward has had an effect on speed. For example, our research found that the roads around Liverpool saw an increase of +2.2% when our clocks went forward. Newcastle roads sped up by an even larger +2.6% on average (also making the Newcastle road system one of the fastest in the country at an average speed of 61.33mph). Whilst +2% might sound a small figure, it’s important to remember that even the slightest increase or decrease can cause traffic build-up, which in turn creates a higher probability of an accident and usually worse driving decisions. Ensuring that SMEs uphold a duty of care surrounding employees who are on the road for business purposes is important. Vehicle tracking systems allow for this, by providing a real-time snapshot of a driver’s activity, thereby allowing speed to be closely and centrally monitored.

How does this affect those who use vehicles for business?

For business and fleet owners, the change has proved to be a major factor on the roads. The change to the speeding fine calculation influences SMEs the most, as not only can the fine be detrimental to their short-term cashflow but the additional points can hurt their overheads. Penalty points can contribute to increased insurance premiums for fleet drivers and in some cases, a collection of 12 penalty points may see disqualification. For trades that rely on a relatively small fleet of vehicles, such a decision could be enough to wipe out their business.

With this in mind, we’ve made the speeding calculator at the top of the article based on the below occupations to see who is worse of:

Who has been hit the worst?

Unsurprisingly, with a higher than average salary, small building firms are most likely to be hurt hardest by the new fine system. Our calculator estimates that a Band C offence could end up costing over £1,080. Furthermore, if a small building firm faced the maximum of a 56 day disqualification, they could end up losing £8,075 if they could no longer work due to a lack of vehicle. The calculator doesn’t take into account other hidden fines such as increased insurance premiums.

Offenders who happen to be from plumbing or electrician focused small firmsare also likely to be hard hit. A Band C offence will see a fine in excess of £910 and £930 respectively as well as multiple licence points. A fine of this size could prove to be real hammer blow to their bottom line and severely disrupt their business.

What about companies that have a fleet of drivers?

For larger SMEs that employ drivers for their fleet such as maintenance engineers and couriers, the fines can start as low as £200 and go as high as £940, on average. As previously mentioned, whilst the fine does go directly to the driver, the business may also be punished if insurance premiums for business usage also increase – while larger SMEs obviously have a larger cashflow, this is still a flashpoint that needs to be avoided if a business is to remain agile and able to respond to customers efficiently. A disqualification is also likely to cause disruption to the business and in some cases, require them to employ a new driver whilst the offender is “out of action”, again a cost that any SME, small or large, cannot bear easily.

What can businesses do about speeding?

Whilst constant training and education is undoubtedly the best route to deterring speeding, unfortunately, other measures are often required. Just because a driver isn’t getting caught, this doesn’t mean that it should be allowed or encouraged. Speeding laws don’t just protect drivers, but the vehicles themselves. Accidents caused by speeding are not just traumatic but also extremely costly to the vehicle owner. Good quality vehicle tracking systems use GPS technology to monitor vehicle speeds and can be set up easily to record and alert a business to any instance of speeding on the road. This can prove invaluable in acting as a deterrent as well as proving/disproving speeding accusations.