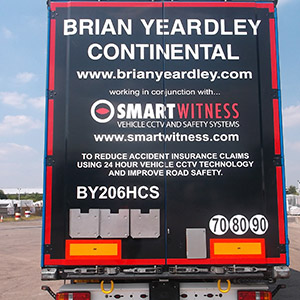 A haulage company are preventing immigrants from entering the UK illegally via their lorries with SmartWitness CCTV cameras.

Wakefield-based Brian Yeardley Continental are stopping stowaways in their tracks with the technology, giving a clear visual warning that they are in use.

The hauliers, who own 43 lorries, have recorded a big fall in illegal immigrants trying to break into their trailers since rolling out the cameras.

“Last year we did over 5,000 crossings both ways across the English Channel and in 2012 we had a total of five immigrants found in our trailers,” said Mr Hopper.

“Since installing the SmartWitness cameras we haven’t had any incidents.

“We take serious measures to ensure our vehicles are protected and sealed and our drivers are fully-trained and aware of the immigrant problems in Calais.”

“We take serious measures to ensure our vehicles are protected and sealed and our drivers are fully-trained and aware of the immigrant problems in Calais.”

The Home Office can impose a fine of up to £2,000 for each person found travelling illegally to the UK inside their vehicles, whether the driver is aware or not.

“Since fitting SmartWitness and fitting the stickers to the trucks and on the rear doors of our trailers where the immigrants normally make entry we have not had any incidents and I do apportion a lot of this down to SmartWitness,” added Mr Hopper.

“Our trucks spend 90% of their lives working in Europe – mainly Spain, Portugal France and Italy.

“We are constantly trying to ensure our drivers’ safety and welfare is protected and stowaways are prevented from getting on board.

“Our drivers are often away for up to eight weeks at a time and it gives me a peace of mind knowing that when they are parked up, the cameras are there to help protect them from stowaways and thieves.

“Our vehicles are used to transport hazardous chemicals all over Europe and so insurers are much happier to know that we are much less likely to have illegal immigrants breaking into the trailers where there are potentially dangerous chemicals.

“They are much happier knowing that we have installed SmartWitness to prevent this.

“I believe a significant amount of this reduction is down to the cameras.”

Simon Marsh, Managing Director of SmartWitness, added: “We have seen a huge increase in sales to international hauliers wanting to protect their drivers and fleets.

“Having vehicle CCTV is definitely deterring illegals and hopefully it will make them think twice about risking their lives by trying to gain entry under a truck.

“Dramatic photographs of stowaway trying to break into HGVs this week have shocked many in the UK and there have been four deaths at Calais where illegal immigrants were trying to gain access to moving lorries heading for the UK.”