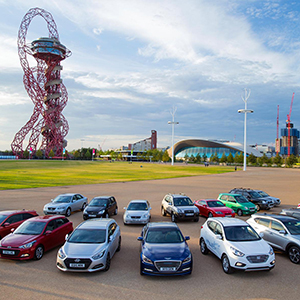 Hyundai Motor UK is this year celebrating its landmark anniversary of 10 years in the UK, since the subsidiary was founded in July 2005*. This period has been the most significant in the Company’s history both in the UK and Globally.

Since its official opening in 2005, Hyundai Motor UK has sold over 600,000 units, with over 82,000 cars sold in 2014 alone.  The brand’s market share has more than doubled from 1.5% to 3.5% making it the fastest growing car manufacturer in the UK. Hyundai Motor UK’s rapid growth can also be seen at the company’s import centre at Tilbury Docks in Essex, which has grown to three times its original size in order to accommodate the increased demand.

Not only has the company grown in terms of volume, but the company has invested over £35.2 million in its dealer network over the past 10 years with over 70% of the dealer network changing since 2005. Most recently, Hyundai introduced its new dealer showroom identity.  Reinforcing Hyundai’s commitment to delivering exceptional levels of customer service, the new look dealership has evolved significantly. It combines open space, modern furnishings and the latest technology to deliver an enhanced customer experience. The Company has also recently introduced in partnership with Rockar, the world’s first digital retail experience – Rockar Hyundai – where it is possible to purchase a car online or in store in under five minutes. With over 120,000 visitors to the store in Bluewater over the last 7 months, the success of Rockar Hyundai so far shows that there is room to offer an alternative process for buying a car for those people that want it.

Globally, Hyundai Motor has sold over 37 million cars over the last decade –with 1.7 million cars sold in 2005, compared to 4.96 million in 2014. Additionally, Hyundai was named the 40th most valuable brand in 2014, up 44 places since 2005**. This transition means Hyundai is the fastest growing automaker in the world, with a brand value increase of 200% over the 10 year period.

“Over the last ten years, Hyundai Motor has been the most significant and impressive car company on the world stage.  They are clearly number one in Korea despite the Asian Financial Crisis, they are one of the top companies in China and a major player in the US.  They have solidified their position in Europe by not just selling into but manufacturing in the region –this is the sign of a truly global company.

Rhys adds: “They have been able to tap into consumer preference in the UK by offering customers what they want and were quick to respond when the recession hit and the scrappage scheme was introduced –other brands had the right products at the right price but they failed to act as quickly.  Hyundai’s success though would not have continued without the investment in product.  In my opinion, Hyundai Motor has definitely been one of the smartest actors in the automotive industry over the lastdecade.”

Tony Whitehorn, President and CEO, Hyundai Motor UK, said: “I joined Hyundai in 2005, and it’s fantastic to see how far the company has come in such a short space of time. Our success has been driven by three key areas: our product, our customer and our people.”

“Back in 2009, we took a risk. When the government launched the ‘Scrappage Scheme’, we were ready and waiting to fulfill customer orders when many other manufacturers were running out of stock. It’s this move that led us from 28,000 sales in 2008 to over 61,000 in 2010.  However, our continued investment in product, the brand and the customer experience has ensured we are not just a one trick pony!

“The brand has seen sales continue to rise year on year, with 15 consecutive quarter increases and this year looks set to be our best year to date.  But the best is yet to come – we are  targeting 100,000 sales in the UK in the next few years, with a long-term goal of being within the top five car brands in the UK in the not too distant future.” concludes Whitehorn.

David Neech, a loyal Hyundai customer from Seaford in East Sussex, commented: “My family and I have owned 20 Hyundai cars since 1992 – the first being a Sonata Saloon. Over that time, I have noticed great changes. I can’t believe how much technology is on my latest car. I still haven’t worked out what it all does! But the key thing is that even with more technology and equipment; Hyundais are still so reliable.

“The brand’s design has also evolved – each new model that the Company launches looks much more sophisticated. I have to say that I’m very proud to have the stylish ix35 sitting on my drive today.

Neech added: “My local dealership, Brooklyn Hyundai, has changed dramatically too. It is now magnificent, not that I have to visit there very often!  In fact, in 20 years I have only ever had one issue with a vehicle. What impresses me the most is that even though Hyundai has grown significantly over the past ten years, my local dealership’s service hasn’t faltered. They are always so friendly and welcoming and I still feel like a truly valued customer.”

To celebrate the 10th anniversary, Hyundai Motor UK will be launching a world-first driving challenge in London.  More details will be released this Autumn.

The challenge will culminate in a celebratory event where another Hyundai milestone will be announced.