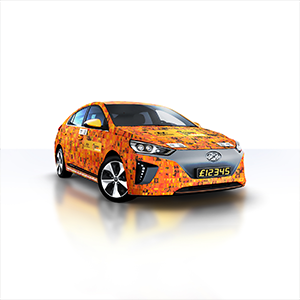 Hyundai Motor UK is kicking off its partnership with Stand Up To Cancer by creating a fundraising world-first: a Contactless Car. Using a zero-emission IONIQ Electric vehicle, this one-of-a-kind car will allow people to donate to the charity with just a tap of their credit or debit cards*.

Featuring five contactless donation points, the bespoke IONIQ will provide a quick, convenient and unique way for the public to TAP TO GIVE™ in order to make a secure donation to Stand Up To Cancer.

The money raised by the Contactless Car will be used to fund ‘translational research’ which helps to turn breakthroughs in the lab into revolutionary treatments for cancer. Each donation of either £5 or £10 will trigger the innovative car to thank people for their generosity with an audio or visual cue, or an electronic movement. The IONIQ’s number plates will also become a digital totaliser which will increase every time someone donates.

The Contactless Car follows on from a successful trial carried out by Cancer Research UK as part of the 2016 Stand Up To Cancer campaign, which equipped cash bucket collectors with technology that allowed them to take contactless payments. Supporter feedback from this trial was overwhelmingly positive, with 25% of income being generated from contactless donations.

Working with specialist technology and fabrication partners, the Contactless Car will be custom -made using Ardunio micro-controllers and Raspberry Pi micro-computers to ensure that the car reacts instantaneously to each and every contactless donation.

The contactless readers will be embedded seamlessly into the panels of the IONIQ vehicle and will be adapted to co-ordinate with the bespoke LED totaliser that will be built into the front and rear numberplates.

Hyundai UK will be encouraging employees, customers and the general public to all unite and help #DriveTheRebellion by raising money for life-saving research with this world-first fundraising project.

980 people are diagnosed with cancer every day in the UK – one every two minutes – but through crucial funding, scientists can continue to make breakthroughs and today’s discoveries will be turned into tomorrow’s cancer treatments.

Members of the public will be able to see the Contactless Car for the first time at a launch event on 22 May 2017 inside King’s Cross station, London. Following its launch, it will be driven across the UK appearing at a number of Hyundai and Stand Up To Cancer events between May and November 2017.

At these events, donors will be encouraged to join the rebellion by using the in-car photo booth. Users will be able to stick their photograph to the car’s exterior and eventually, the Contactless Car will be completely covered in a mosaic of images showing everyone who’s stood up to cancer by donating vital funds.

Tony Whitehorn, President and CEO of Hyundai UK said: “We are extremely proud to be supporting Cancer Research UK this year as an official partner of Stand Up To Cancer, and we’re helping in the way that we know best – with innovation. Cancer doesn’t discriminate; one in two people born after 1960 will be diagnosed with the disease at some point in their lifetime. But our world-first Contactless Car will be designed to make joining the rebellion against cancer as easy, convenient, and as engaging as possible. I hope that people will come together, with their cards at the ready, and give generously to such an important cause that will save lives across the UK.”

Rachel Carr, Head of Stand Up To Cancer, said: “We’re always looking for new ways to engage and excite supporters and Hyundai has come up trumps with the creation of the world’s first Contactless Car. It’s an exciting partnership that brings a fun and simple way of donating to the masses. We’re hoping people across the UK will be impressed and inspired by the vehicle and will choose to tap and donate to support Stand Up To Cancer’s work to bring kinder and better treatments to patients, faster.”

Stand Up To Cancer is a joint national fundraising campaign from Cancer Research UK and Channel 4. Launched in the UK in 2012, Stand Up To Cancer has raised more than £38 million to date, supporting over 40 clinical trials and projects.