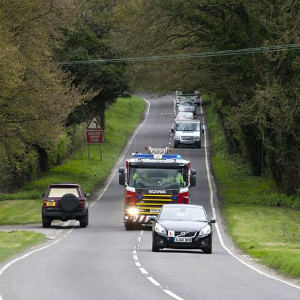 ROAD SAFETY and breakdown organisation GEM Motoring Assist has today launched a consultation ahead of a proposed remake of its popular Blue Light Aware video.

The move confirms GEM’s support for the work done by the emergency services, and its commitment to help road users stay safe and legal when making room for a ‘blue light’ vehicle.

GEM road safety officer Neil Worth comments: “Everyone wants to help clear the way for an emergency vehicle, but sometimes it can be difficult to understand the expectations of the emergency driver.

“Judging by how widely the resource has been used since its launch in 2011, we believe it to have been successful and helpful. We are today asking for feedback from the organisations who helped us create Blue Light Aware, to find out how useful it has been to them and their drivers – as well as inviting them to suggest what they would like to see included in a 2018 version.

“While much of the advice from the original video still applies, we believe there is a need to provide specific advice for smart motorways, which have become much more widespread since 2011.”

When it comes to helping a blue light vehicle, Neil Worth says awareness and observation are the most useful skills, as you will see and hear an emergency vehicle earlier, and will have more time to plan what you may need to do, whilst staying safe and legal in the process.

“Often, all that’s needed is a brief, considerate move to the left to give some extra space to the emergency vehicle. Just remember that you have no exemptions to the law, so don’t exceed speed limits, don’t go through red traffic lights, don’t use bus lanes and don’t do anything dangerous in your attempt to help.”

The consultation questionnaire is publically available at motoringassist.com/bla and will remain open until 21 February 2018.

Safety tips for drivers from GEM for assisting emergency vehicles:

•  Stay calm and avoid sudden braking. You’re responsible for your own actions on the road, so whatever you do mustn’t break the law or cause danger.

•  If you can, indicate left and pull over, keeping an eye out for pedestrians and cyclists. Avoid pulling over on the brow of a hill, a bend or on a narrow section of road.

•  Don’t mount the kerb, as this could put pedestrians at risk and may cause damage to your vehicle.