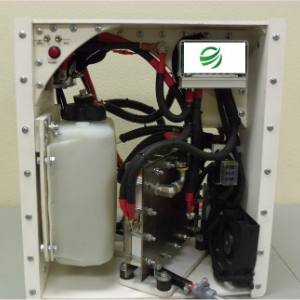 AN environmentally friendly device that reduces exhaust emissions while increasing the fuel efficiency of internal combustion engines will be available before the end of the year.

Hydroflex is preparing for final trials of its version one hydrogen-based fuel reduction system in South Australia ahead of a commercial launch.

The systems can be fitted to any internal combustion diesel or petrol engine ranging in size from a scooter to a cruise ship and lead to fuel savings of 10 to 15 per cent.

Hydroflex, formerly known as Hydrogen Power Systems, relocated from San Diego in the United States to the Tonsley Innovation Hub in the South Australian capital Adelaide in April.

Chief Technology Officer and inventor Richard Connors has been working on the device for a decade.

He said unlike catalytic converters and diesel particulate filters that treated emissions “after the fact”, his device used hydrogen and oxygen to increase the amount of fuel burnt in the combustion process.

“We have a device that is cost effective and delivers value to the bottom line of the customer and at the same time reduces all seven types of pollution that normally come out of the back end of an exhaust pipe – we positively reduce all of them at different ratios,” Connors said.

The device includes a 1.5 litre tank of water with an electrolyte in it. A small voltage of electricity is applied to the water to initiate electrolysis that creates hydrogen and oxygen vapour. The vapour is then piped through a standard rubber hose to the front of the air filter where it is combined with normal air to produce a hydrogen enhanced combustion process.

“So our hydrogen and oxygen is not a fuel, it is an accelerant that is consumed in the process and thereby because it moves the flame front faster it burns more of the fuel leading to more power and less pollution,” Connors said.

The Hydroflex device has been vetted by government officials and does not need any special approvals before fitting to a vehicle.

Pricing will be dependent on the size of the engine and the level of after sales support required, but payback periods would average about 12 months for most engines.

The reduction in carbon emissions could also make companies eligible for carbon credits.

Connors said each device had an expected life of at least five years.

A cash prize to entrepreneurs is being offered to those who can help Adelaide win the race.

Hydroflex has entered the Low Carbon Entrepreneur’s Prize the first initiative unveiled as part of the Adelaide to Zero Carbon Challenge – a new program aimed at cutting greenhouse gas emissions, generating new green businesses for the state and ensuring Adelaide is a showcase city for renewables and clean technology.

Hydroflex Chief Operating Officer Ron Basset said the stop-start nature of city garbage trucks and buses made them good candidates for the device.

The company is initially focusing on large engines such as generators on mining sites, long-haul trucks, ships and diesel trains because they represent the biggest opportunities in terms of fuel savings and emission reductions.

Independent testing will begin on generators for the mining industry and trucks for the transport industry in the coming weeks.

The first commercial units are expected to be available for sale before the end of the year.

“We’ve got version one, which is for vehicles manufactured up to 2010. For version two we need to create an electronic handshake between our system and anything past 2010 – that should be ready within three months,” Basset said.

“Version three in 18 to 24 months will fit in everyone’s car and we envisage that people will be able to buy it and get it installed for between $300 and $400 that’s our target.

“What we’d like to see for version three is to get the support of the Federal Government where there are grants to get the systems installed, like there was with LED lighting, because they will lower emissions.

“A lot of the other technologies out there are years away from commercialization, this is ready now and that’s the most exciting thing about this project.”

The company is also in talks to have its device as an optional extra for the recently launched British sports car the Trident, which boasts a 6.6-litre V8 turbo diesel engine and claims to be the “fastest and most fuel efficient diesel sports car” available.

Hydroflex is looking to raise between $500,000 and $1 million (AUD) in capital in the next month or so to help accelerate the commercialization process.

About a third of South Australia’s energy comes from renewable sources. It is Australia’s biggest wind energy producing state and has the highest uptake of household rooftop solar in the nation. It also plans to reach a renewable energy production target of 50 per cent by 2025.