‘Quieter and smoother than ever’: Vauxhall unveil 1.0litre engine ahead of Adam bow 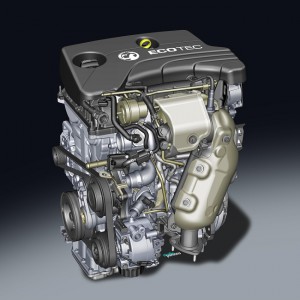 Vauxhall will unveil an all-new high-tech 1.0litre three-cylinder petrol engine at next month’s Frankfurt Motor Show, ahead of its forthcoming debut in the Adam.

Belying its small size, the unit develops 115PS whilst delivering generous low-end torque of 166Nm in the range 1,800 to 4,700rpm.

Fuel efficiency is also improved by 20% compared with the current 1.6-litre naturally aspirated unit that powers the Astra.

With an all-new six-speed gearbox, the 12valve, 1.0litre turbo is the first in a new, modular family of three and four-cylinder Vauxhall petrol engines up to 1.6litres.

Dr. Matthias Alt, Chief Engineer of Small Gasoline Engines at Vauxhall, said:  “In developing this small engine, we not only set out minimise fuel consumption and CO2 emissions.

“We also wanted to demonstrate that three cylinders can be just as refined as four or more.

“We tackled at source the balance, noise and vibration issues typical of conventional three-cylinder engines, and we’re confident customers will be pleasantly surprised by the results.

“This is a very lively and refined three-cylinder engine which doesn’t compromise driving fun.”

With a dry weight of only 37kg and a compact 375mm along its axis, the box is about 30% lighter than its current counterpart.

Having short lever travel and low shifting effort, the new transmission incorporates many of the refinements recently introduced on Vauxhall’s next-generation gearboxes.

The launch of the 1.0litre SIDI Turbo and its new six-speed gearbox is the latest step in the renewal of Vauxhall’s powertrain portfolio.

The portfolio will see three new engine families and 13 new engines introduced between 2012 and 2016, plus a host of new transmissions.