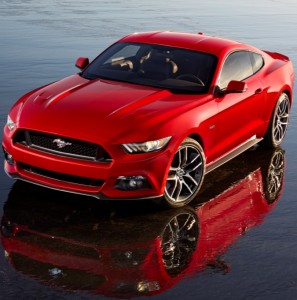 Unveiled at a special event in Barcelona, the new fastback and convertible models ‘promise world-class levels of performance and refinement’ and will reach the UK in 2015.

It will initially be paired with a 426PS 5.0litre V8 engine or 309PS 2.3litre EcoBoost engine, with the latter using direct injection, variable cam timing and turbocharging.

“The visceral look, sound and performance of Mustang resonate with people, even if they’ve never driven one.

“Mustang is definitely more than just a car – it is the heart and soul of Ford.”

More than nine million Mustangs have been sold since being launched in 1964.

The world’s most-liked vehicle on Facebook, it has made thousands of appearances in film, television, music and video games.

Stephen Odell, Executive Vice President for Europe, Middle East and Africa at Ford, added: “The Mustang’s formidable reputation for performance and its iconic status as a symbol of freedom and optimism precedes it even in those parts of the world where the car has never been sold.

“The new Mustang epitomises Ford’s aggressive product acceleration; technologically advanced and forward-looking, but without forgetting the heritage that has inspired Ford customers for generations.”

Further details, specifications and prices will be released closer to launch.