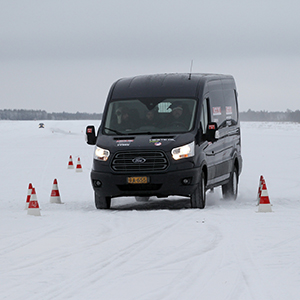 Ford have achieved a landmark victory in the Arctic Van Test, one of the world’s most gruelling examinations of vehicle performance.

The all-new Transit and Transit Connect delivered the manufacturer’s first double win in the 23-year history of the test, which puts vehicles through a series of challenges in severe winter driving conditions.

Both vans finished first in their respective classes after competing in the five-day ordeal, with vehicles and drivers subjected to extreme challenges in ice, cold and snow.

Tests, which included slaloming on a frozen airfield and a 700km endurance drive, took place in the north of Finland, where temperatures hit as low as -50C.

Paul Randle, Vehicle Line Director for Global Commercial Vehicles at Ford of Europe, said: “Every one of our new Ford Transits is tested in the world’s toughest climates and driving conditions long before launch, so they are prepared for just this kind of challenge.

“Our customers depend on their Transits to get the job done, and we have made sure they are ready for work, whatever the weather.”

“Every one of our new Ford Transits is tested in the world’s toughest climates and driving conditions long before launch, so they are prepared for just this kind of challenge.”

The all-new Ford Transit was rated top or joint-top in nine out of 13 categories against rival vehicles from Mercedes-Benz, Vauxhall and Volkswagen.

Ford’s smaller Transit Connect was ranked top or joint-top in seven categories, and particularly impressed for its handling and stability in icy conditions, against rivals from Citroen, Renault and Volkswagen.