BMW i3 deal ‘first of many’ for Motiva 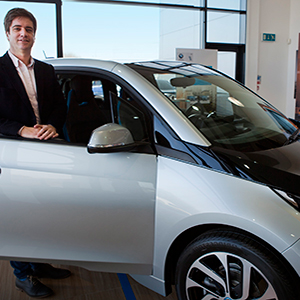 MAIDEN: Deal be first of many for Motiva?

A ground-breaking deal for an electric car is being heralded as the first of many for fleet solutions firm Motiva.

The Stoke-based company have completed a contract for an all-electric BMW i3 – the first time they have provided a vehicle which runs on alternative fuel.

Catering firm Delicious nabbed the i3, in an effort to cut costs and reduce carbon footprint.

Peter Wright, Sales and Marketing Director, claims the deal is likely to be the first of many.

“As a company, we’ve always been open to the idea of alternative fuel vehicles, but have shied away from putting them on our fleet in the past largely because of general uncertainty surrounding their true viability and of worries about residual values,” he said.

“This BMW seems to represent a giant leap in terms of technology and is by far the best we’ve seen so far.

“It’s the first serious alternative to petrol and diesel.

“It looks good, has a contemporary feel and it drives well.

“It’s an electric vehicle that has been designed from scratch, rather than adapted version of something that already exists, and you can certainly tell the difference.

“There are obvious savings to be made on fuel costs and emissions, but there are major tax breaks for companies too and this deal could be the one to start a trend.”

“We’ve always been open to the idea of alternative fuel vehicles, but have shied away from putting them on our fleet in the past.”

The i3 can run for around 100miles on a single charge, but a range-extended version uses a two-cylinder petrol engine to provide a safety net of 180miles.

Mr Wright claims the vehicle is a big step in the right direction in the search for alternative fuel vehicles that work for fleets.

“This could be the ideal solution for companies whose vehicles perhaps make several trips around town every day, or for those who commute to work,” he added.

“But for fleets running higher-mileage journeys with wider coverage and unscheduled trips, there are still range issues that need to be addressed.

“While this is as good as it gets within the technology that is currently available, I’d say we’re still perhaps 10years away from reaching a turning point where everyone will go for the green option.

“But we’re certainly nudging closer to the day when electric cars – and vans – will become a credible fleet option.”

Dominic Bowers, Managing Director of Delicious, added that the i3 could be rolled out elsewhere in the company if it proves up to the job.

“I spend most of the day doing quick runs around our various sites in Staffordshire and I wanted a car that was different, so when I saw the i3, it was perfect on both counts,” he said.

“I wanted to save money and show social responsibility while still being contemporary and this will save me around £450 a month in the long run.

“This range-extended version is both economical and stylish and it ticks all the boxes for me.

“I’ll see how it goes and if I think it will work for us, it could well work for our fleet in the longer term.”