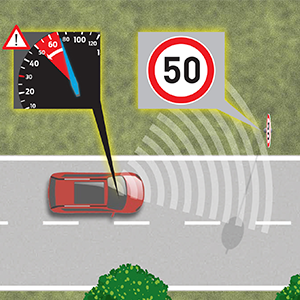 Breaking the speed limit can be costly – with escalating fines, driving bans, and a significant role in some road accidents. New legislation introduced this week will dramatically change the way speeding fines are calculated, with offending drivers facing penalties of up to 175 per cent of their weekly wage.

However, Ford’s Intelligent Speed Limiter technology gives drivers the peace of mind to drive safely within the speed limit, and stay focussed on the road.

Across Europe there are more than 35,000 safety cameras, and in some countries speed limits are being reduced. The technology from Ford Motor Company could automatically help prevent drivers from exceeding speed limits – both when driving in their own country, and while driving abroad.

Drivers can choose between speed limiting systems in the vehicle menu using the steering wheel controls, and activate them using the speed system controls. Maximum speed for Intelligent Speed Limiter can be set and then raised or lowered in 5 mph increments.

Intelligent Speed Limiter allows drivers to set a speed tolerance of up to 5 mph above the detected speed limit. The system does not apply the brakes but smoothly controls engine torque by electronically adjusting the amount of fuel delivered.

If the S‑MAX overruns the set maximum speed because of a downhill gradient, an alarm is sounded. Drivers can temporarily override the system by pressing firmly on the accelerator.

“Speed limiting technology was last year specified on around two thirds of Ford vehicles for which it was available – proving popular with drivers who want to ensure they avoid incurring speeding fines by unintentionally exceeding the speed limit. Intelligent Speed Limiter makes that even easier,” said Stefan Kappes, active safety supervisor, Ford of Europe.

The technology is currently available on Ford Kuga, Edge, S-Max and Galaxy, and the next generation Ford Fiesta will feature Traffic Sign Recognition technology.