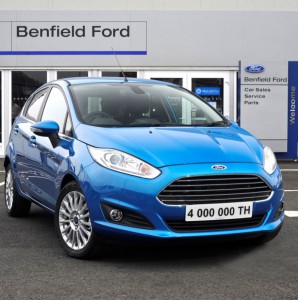 The landmark-busting Fiesta – a Zetec in Candy Blue with the award-winning 1.0litre EcoBoost engine – was presented to a customer at a North East dealership.

Mrs Wardale said: “When I was told I’d chosen the four millionth Fiesta I was totally shocked – it’s not the sort of thing that normally happens to me!

“I just love the style of the Fiesta; it’s very economical to run and does everything I need.”

Fiesta has led the small car segment in the UK for 27 of its 37 years, and has been Britain’s overall bestseller since 2009.

More than 17million Fiestas have been sold in 80 markets worldwide.

A third of Fiesta buyers in the UK today choose the turbo-charged 1.0-litre EcoBoost engine.

In contrast, the lead-in Ford Fiesta of 1976, available for less than £2,000, modestly featured PVC upholstery, carpets and laminated windscreen as standard.

Mark Ovenden, Chairman and Managing Director of Ford Britain, said: “The success of the Ford Fiesta means a great deal to the whole Ford team.

“This car combines style, value, driving dynamics and remarkable technologies such as the award-winning EcoBoost engine and Ford MyKey.

“Today it outsells its nearest retail competitor by more than two to one – and that really tells the story of this extraordinary car.”