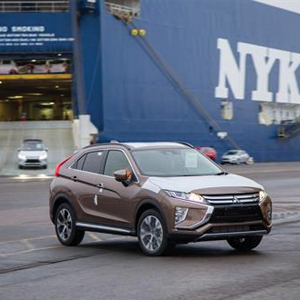 In readiness for the launch of the all-new Mitsubishi Eclipse Cross later this month, the first shipments of the stylish SUV have landed in the UK.

The Mitsubishi Eclipse Cross were unloaded at the import centre of Mitsubishi Motors in the UK at Bristol’s Royal Portbury Docks over the Christmas period, with more shipments set to dock in the following weeks.

Spanning the entry-level Mitsubishi Eclipse Cross 2 to the distinctive ‘First Edition’ version that marks the model’s launch in the UK, the new SUV will soon be making its way to Mitsubishi dealerships throughout the country ahead of the first customer deliveries later this month.

The first shipments and those that are set to follow will enable Mitsubishi Motors to meet demand for the Mitsubishi Eclipse Cross. Since its world premiere at this year’s Geneva Motor Show, the announcement of its attractive pricing and highly competitive finance packages and its availability through the brand’s Buy Online facility, interest in the all-new Mitsubishi Eclipse Cross has been building steadily with buyers in the UK.

Lance Bradley, Managing Director, Mitsubishi Motors in the UK, said: “We anticipate that the Mitsubishi Eclipse Cross will quickly become one of our most popular models and we are preparing to meet demand, while also ensuring that lead times are optimised for customers, whether they are purchasing at a dealership or through Mitsubishi Buy Online. With its distinctive style, high levels of equipment and impressive value, the Mitsubishi Eclipse Cross will appeal to a whole spectrum of car buyers.”

The Mitsubishi Eclipse Cross offers a choice of three trim levels – 2, 3 and 4. Whilst stocks last, there is also an exclusive, highly-equipped First Edition version available that celebrates the launch of the new SUV, which is limited to a production run of only 250. From launch, all variants are powered by a 1.5-litre turbocharged petrol engine, mated to a six-speed manual (FWD only) or an all-new eight-step CVT automatic transmission (FWD and 4WD). Included in its high standard specification are Lane Departure Warning and Forward Collision Mitigation (FCM), which uses radar technology to detect a risk of collision, and which have contributed to the Mitsubishi Eclipse Cross achieving a maximum 5-star Euro NCAP rating. The range is priced from £21,275 OTR with the top-of-the range 4 version starting from £24,975 OTR.