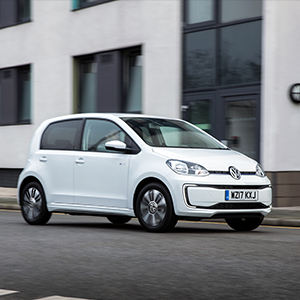 The new car was handed over recently, as Volkswagen ramps up production of the new e-up! in its ongoing commitment to maintaining its status as a leader in electric and hybrid-engined cars.

The customer, John Back, said: “I’m very pleased with my new e-up!. It’s a lovely vehicle to drive. My daughter has a High up! and I was suitably impressed with its comfort and ride and that carries over to the e-up!. It suits my lifestyle and needs – it’s ideal for island use.”

Clever packaging and advanced technology make the new e-up! one of the most flexible electric cars for city and extra-urban use too. A top speed of 80 mph is achieved thanks to its advanced 60 kW electric motor, which has a range of up to 99 miles*.

The substantially revised e-up! features revised interior and exterior styling, plus an advanced new infotainment system. The first examples of this next generation of electric city car are available to order at Volkswagen Retailers nationwide, and are on sale at £25,280 (RRP OTR) before the government’s plug-in Car Grant of £4,500 is applied.

The new e-up! intelligently provides the technology to revolutionise commuting. The zero emission Volkswagen can be charged overnight and with consideration to that generous range, a lengthy commute can be completed with ease. The car’s diminutive proportions add to its suitability and ease-of-use in typically tight commuter traffic.

And the single-ratio gearbox, which is optimised for minimum friction, makes driving in traffic easy and noticeably quiet.

The e-up!’s lithium-ion battery is rated at 374 volts and 18.7 kWh. It can be fully charged from a standard household plug in nine hours, and that time that can be reduced to six hours if an optional 3.6 kWh wall box for home garage use is purchased. Two charging cables, for regular and fast charging, are included, and when connected to a fast charge point the e-up!’s battery is 80 per cent replenished in just 30 minutes.

The battery is made up of 204 cells and is located under the front and rear seats to increase boot space and to provide optimum safety in the event of an accident. For peace of mind, the battery comes with an eight-year or 99,360-mile guarantee.

And it’s that battery cell pack and electric motor that provide plenty of entertainment in the e-up! The car’s near-instant 210 Nm of torque under acceleration gives it a crisp and responsive level of performance. The 0–62 mph time is 12.4 seconds.

When the driver is behind the wheel, it’s not just the performance that excites: in line with the rest of the up! range the e-up!’s infotainment system has been thoroughly updated. Instead of docking a separate console into the dash of the e-up!, as was the case with the previous version, the revised car uses the customer’s own smartphone. The phone is simply clicked into the dashpad docking station and then, when Volkswagen’s ‘Maps + More’ app is selected, the full infotainment options become available.

‘Maps + More’ is a comprehensive app that includes satellite navigation and a whole variety of other features. The satellite navigation provides a 2D or a 3D route display. Also included in ‘Maps + More’ is a function to enable the driver to search through their phone contacts using handwriting recognition, and they can then make a hands-free call via a Bluetooth connection.

Controls for the radio and access to the smartphone’s music library are other key functions of ‘Maps + More’, and again the handwriting technology makes the interface system seamless. Information about the e-up!’s electricity consumption and remaining battery life can also be viewed with ease.

A clever element of ‘Maps + More’ is the Think Blue. Trainer. This is a system that shows the driver how they can improve their driving to make it more economical.

Building on the electric powertrain and the advanced smartphone connectivity, the e-up! is packed with other features that set it apart from its rivals. The complete up! range features big car technology as standard including, as a minimum, anti-lock braking, electric front windows, Composition radio and power steering. The e-up! goes a few steps further, starting with stylish 15-inch ‘Tezzle’ alloy wheels that are fitted with low rolling resistance tyres.

Electronic air conditioning brings comfort, while convenience is underlined thanks to the heated front windscreen and a rain sensor that operates the windscreen wipers automatically. Rear parking sensors reduce the potential for car park bumps, while cruise control makes for a relaxed drive.

The e-up! is joined by the e-Golf in Volkswagen’s all-electric line-up and both cars share bright ‘C’ signature LED daytime running lights. Both cars also have a blue and chrome strip below the bonnet lip. This echoes the red strip that has been a feature of the iconic Golf GTI since the 1970s, and the petrol-electric hybrid Golf GTE and Passat GTE models also share the blue and chrome look.